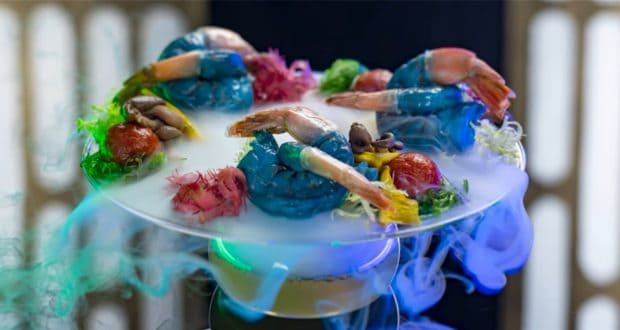 Blue Shrimp Is Coming To Disney World & We Can’t Wait To Try It!

We previously shared the exciting news that Walt Disney World’s newest incoming resort, Star Wars: Galactic Starcruiser is opening “Spring 2022”. Of course, this “resort” can’t be compared to any Disney resorts in this galaxy! Disney has said it will be an “all-immersive, two-night vacation experience that goes beyond anything Disney has ever created before.” When the Starcruiser was delayed until 2022, we did our best to hold tight and be patient. We have learned about new dining experiences and even noticed Disney holding auditions for key characters for the experience. With new details recently shared by Disney, we noticed something Disney foodies may want to take note of. It looks like BLUE Shrimp is coming to Walt Disney World!

Disney recently had Imagineers that have been hard at work developing Star Wars: Galactic Starcruiser sit down for a round table discussion. In the discussion you’ll hear pieces of intriguing experiences you can expect to see onboard the Starcruiser. Of course, our ears perked up when they started talking about FOOD! Even better, they shared images of some of the unique options… one image being some form of blue shrimp!

Blue shrimp?! Would you be willing to try it? During the discussion, Disney Imagineers shared that meals are included onboard over the two-day cruise. The team members that developed the food and beverages have gone above and beyond, creating food and beverage concoctions that truly feel like they are from a different galaxy. Chefs have taken ownership of the Star Wars storytelling resulting in “wildly dramatic” food! One of the Imagineers said, “Do I eat that or do I want to watch it?” They are taking really delicious things and working on presenting them in unexpected ways, all inspired by and of Star Wars DNA. Even what you eat on the Starcruiser enforces you’re in a galaxy far, far away.

If blue shrimp doesn’t do it for you, just check out some of the other enticing images below that were shared!

What these dishes are and where on Star Wars: Galactic Starcruiser you’ll be eating them is still a mystery! Want to listen in on the round table discussion to hear all the details? Check out the video below:

Head on over to www.starwarsgalacticstarcruiser.com to find photos and details as you prepare for Spring 2022. Anyone else willing to try the blue shrimp?

2021-08-01
Jamie Sylvester
Previous: Disney+ To Have More Behind the Attraction Episodes This Month
Next: New Celebration Announced For Spider-man 60th Anniversary