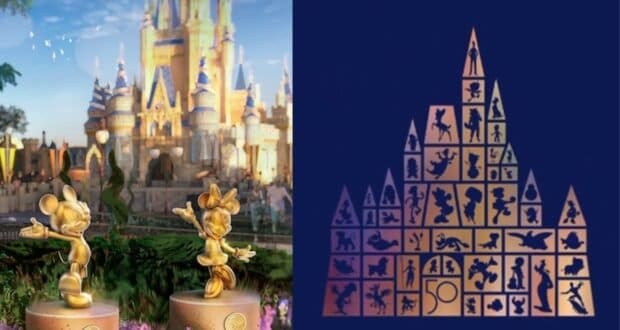 With under 25 days away from Walt Disney World’s 50th Anniversary Celebration, we’re gearing up for a fantastic Fall with big celebrations honoring 50 years of magic. The 18-month long magical celebration begins on October 1, 2021, and Disney’s preparations are well underway. Two new nighttime spectaculars including Magic Kingdom’s “Disney Enchantment“ and EPCOT’s “Harmonious” are coming to Disney Parks. Disney’s newest attraction, Remy’s Ratatouille Adventure is coming to EPCOT while over at Disney’s Animal Kingdom, “Disney KiteTails” will soon be making a debut. While we are looking forward to all of these experiences the “Disney Fab 50” character collection coming to all four parks is drawing another experience to add to the celebration. We have been counting down the sculpture reveals below. The Fab 50 character collection Castle slots seem to be full, but by our count – we’re missing a statue… character #50. Check out the latest additions and our character list below.

In celebration of the 50th Anniversary, beginning October 1, Guests will have a chance to scavenger hunt through each theme Park including Magic Kingdom, EPCOT, Disney’s Hollywood Studios, and Disney’s Animal Kingdom to virtually “collect” golden Disney character sculptures on Instagram. One of the most recent sculpture additions was announced by restaurant owner and Chef, Wolfgang Puck who took to Disney Parks Blog Instagram stories to share the news that #45 and #46 is a golden statue for Lady and the Tramp who will be joining the Fab 50 lineup!

Next, #47 was announced by Anthony Gonzalez, the voice of Miguel from the beloved film Coco. Anthony announced Miguel will be joining the Fab 50 sculptures!

Another duo is the most recent addition to the Fab 50. That’s right #48 and #49 were announced by Tamron Hall, host and executive producer of the Tamron Hall Show. Tamron shared the news that Pua and Hei Hei from Disney’s Moana are making an appearance together to celebrate Walt Disney World’s 50th Anniversary!

Here’s the lineup of Disney characters included in the “Fab 50” golden sculpture list thus far… with #50 still missing despite the Castle countdown slots all being full as shown in the image above:

Despite the Castle countdown slots being full – by our count, that leaves us with only ONE character sculpture reveal remaining! Which Disney character do you believe will be #50 for the “Disney Fab 50” lineup or is Disney stopping with a “Fab 49” collection instead of the full 50 characters? Maybe Tinker Bell will be flying above the Castle slots, or maybe a character will take the place of the “50” window on the countdown? There is however a possibility that Genie will be added to the list, as he is part of the new McDonald’s Happy Meal toys in celebration of the 50th. We’ll share the news of the full list coming to each Disney Park as soon as all of the golden character sculptures are revealed!