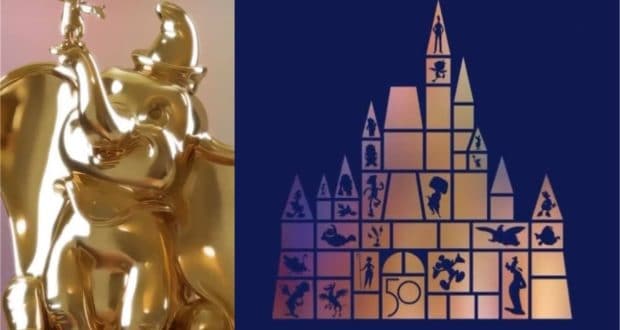 We continue to countdown the days until “The World’s Most Magical Celebration“ – Disney’s 50th Anniversary, kicking off on October 1 for the 18-month long celebration. With two new nighttime spectaculars including “Disney Enchantment” at Magic Kingdom and “Harmonious” at EPCOT making a debut, 50th merchandise at the parks and resorts, and so much more – the highly anticipated celebration continues to build! One experience we’re particularly excited to check out has to be the Disney Fab 50 sculptures that will be available throughout Walt Disney World’s four theme parks. Several favorite Disney characters have been revealed so far, and now we’re learning about Disney’s newest addition… a favorite Disney duo from Dumbo!

Beginning October 1, Guests will have a chance to scavenger hunt through all four Walt Disney World parks to virtually “collect” each golden Disney character sculpture on Instagram. Characters we know that will be included thus far include:

As the Castle slots (shown in the image above) continue to slowly but surely fill in, Disney has now announced another Disney duo has join the Fab 50 lineup! DisneyParksBlog shared via an Instagram story with John Stamos (star in Disney+ series “Big Shot”) that the dynamic duo from the classic animated film, Dumbo will be joining the Fab 50 sculptures at Magic Kingdom Park beginning October 1. That’s right… Dumbo and Timothy Mouse!

Which Disney characters are you hoping to see added to the “Disney Fab 50” lineup? Our count shows Disney has now revealed 23 out of the 50 characters thus far. We’ll keep sharing the news about which characters are included as Disney keeps the Fab 50 countdown going!