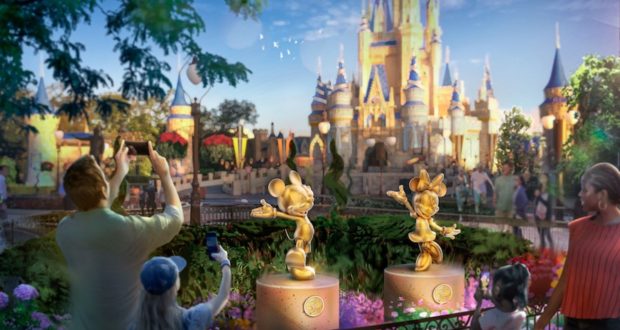 “The World’s Most Magical Celebration” in honor of Walt Disney World’s 50th Anniversary will be here before we know it. Kicking off on October 1, and lasting a full 18-months, we simply can’t wait for all the excitement! Disney is slowly revealing the beloved characters that will make up the “Disney Fab 50” sculptures that will be spread throughout Magic Kingdom, EPCOT, Disney’s Hollywood Studios and Disney’s Animal Kingdom.

Beginning October 1, guests will have a chance to scavenger hunt through all four parks to virtually “collect” each golden Disney character sculpture on Instagram. So far, we know Mickey Mouse and Goofy are two of the stunning sculptures. We have also learned of a popular Lion King duo, Timon and Pumbaa, will be a sculpture located at Disney’s Animal Kingdom. And now – the newest duo addition!

As shared via Disney Instagram: “The dining room is proud to present… Susan Egan! The original Belle from @DisneyOnBroadway’s Beauty and the Beast has revealed that Lumiere and Cogsworth are part of the “Disney Fab 50 Character Collection” that you’ll soon find across the four @WaltDisneyWorld theme parks during “The World’s Most Magical Celebration” starting October 1 #DisneyWorld50”

That’s right – Lumiere and Cogsworth from the classic film, Beauty and the Beast. These two best buds will be located at the Magic Kingdom. We’ll keep you posted as we learn more about the “Disney Fab 50” scavenger hunt, and who the remaining Disney characters may be. Do you have a character you’re especially hoping makes the list of 50?

2021-07-22
Jamie Sylvester
Previous: More Entertainment Returns to Walt Disney World Next Month!
Next: Is Jungle Cruise Already Getting A Sequel?