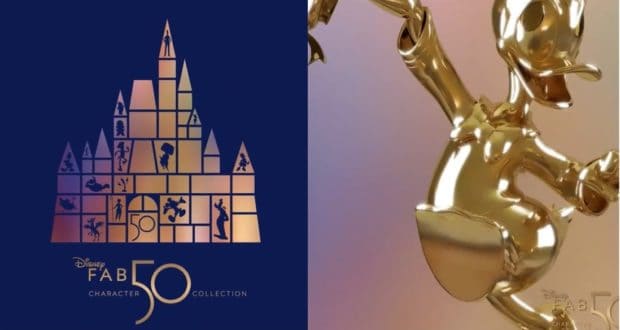 “Who’s the leader of the Club that’s made for you and me?” While yes, Mickey Mouse is the correct answer, we can’t help but think of Donald shouting “Donald Duck” in the background! As the sculpture count continues to grow for the Disney Fab 50 sculptures, Disney’s newest addition would likely say he should have been the #1 reveal! Nonetheless, Walt Disney World’s preparations for their 50th Anniversary (The World’s Most Magical Celebration”) are well underway and we’re eagerly awaiting the arrival of 50 fabulous character sculptures that will be located throughout each of Walt Disney World’s four parks. Even though many Disney fans are focused on the exciting new nighttime spectacular coming to Magic Kingdom called “Disney Enchantment”, and the new spectacular coming to EPCOT called “Harmonious”, we can’t help but get excited to spot Donald Duck and all his friends. Check out the latest details below with Donald’s addition!

Beginning October 1, guests will have a chance to scavenger hunt through all four parks to virtually “collect” each golden Disney character sculpture on Instagram. So far, we know Mickey Mouse, Goofy, Timon and Pumbaa, Lumiere and Cogsworth, Daisy Duck, Winnie the Pooh & Piglet, Edna Mode, Dante, Joe Gardner, Cheshire Cat, and Woody and Bo Peep, are joining the Fab 50. Now, everyone’s favorite duck has made it on the Fab 50 list! Of course, we’re talking about Donald Duck!

The Instagram video says Donald Duck will be available at Magic Kingdom Park beginning October 1. Which Disney characters are you’re hoping to see added to the “Disney Fab 50” line up? We’ll keep sharing the news about which characters are included as Disney keeps counting down the Fab 50!