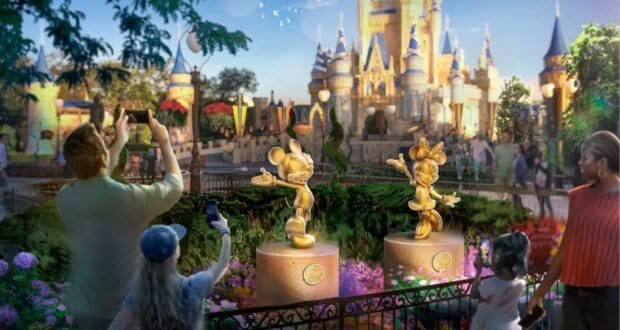 The countdown to Walt Disney World’s 50th Anniversary continues! As October 1, 2021, draws near, Disney is dishing out all sorts of excitement that we can expect for the 18-month celebration. At Magic Kingdom Park we’re ready to experience the newest nighttime spectacular called “Disney Enchantment“. At EPCOT, the new nighttime spectacular “Harmonious” is coming to the Disney Park, as is the newest attraction, Remy’s Ratatouille Adventure. At Disney’s Hollywood Studios, we’ve seen the return of Beauty and the Beast – Live on Stage. Over at Disney’s Animal Kingdom, we’re gearing up for “Disney KiteTails” which will take Disney characters and vibrant colors to new heights. While we’re thrilled with all these new experiences, the “Disney Fab 50” character collection coming to all four parks is drawing our attention today as Disney has revealed 40 of the 50 characters thus far!

In celebration of the 50th Anniversary, beginning October 1, Guests will have a chance to scavenger hunt through Magic Kingdom, EPCOT, Disney’s Hollywood Studios, and Disney’s Animal Kingdom to virtually “collect” golden Disney character sculptures on Instagram. As the Castle slots (shown in the image below) continue to fill in, Disney has announced #38, #39, and #40 in the “Fab 50” character lineup!

First up, as shared by WDW Ambassadors Raevon Redding and Ali Manion via Instagram: “On behalf of all our Cast Members, we are thrilled to reveal that BB-8 is part of the “Disney Fab 50 Character Collection” that you’ll soon find across the four @WaltDisneyWorld theme parks during “The World’s Most Magical Celebration” starting October 1. We can’t wait for this little guy to roll into Disney’s Hollywood Studios soon. May the Force be with you! #DisneyWorld50″

Next, everyone’s favorite pup is joining the lineup! Jimmy Pitaro, Chairman of ESPN, took to Disney Parks Blog Instagram stories to share that Pluto will be joining the Disney Fab 50 character sculptures!

And #40 is a chilling surprise! Michael Giacchino, the composer of The Incredibles, shared via Disney Parks Blog Instagram stories that Frozone will be joining the Disney Fab 50 sculptures.

Welcome to the list BB-8, Pluto, and Frozone! We will soon be able to find BB-8 and Frozone at Disney’s Hollywood Studios. Pluto will be available at Magic Kingdom Park beginning October 1. Here’s the lineup of Disney characters included in the “Fab 50” sculptures thus far:

By our count, that leaves us with only 10 character sculpture reveals remaining! Which Disney characters are you hoping to see added to the 50th Anniversary celebration “Disney Fab 50” lineup? We’ll keep sharing the news about which characters are included as Disney keeps the Fab 50 character collection countdown rolling.