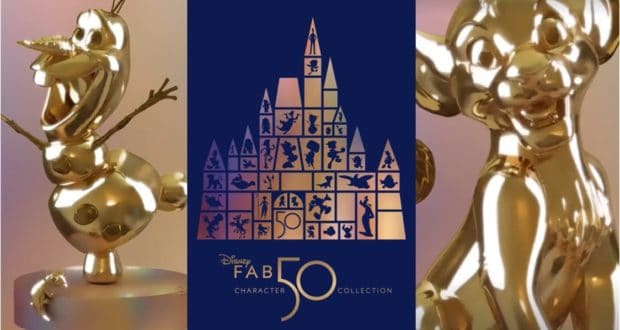 We are less than 40 days away from “The World’s Most Magical Celebration”! It’s hard to believe that after months and months of anticipating the arrival of Walt Disney World’s 50th Anniversary we’re finally ALMOST there! The 18-month long celebration kicks off on October 1, 2021, and is sure to be packed with highly-anticipated experiences such as the new nighttime spectaculars including Magic Kingdom Park’s “Disney Enchantment” and EPCOT’s “Harmonious”. Our attention turns to a special new character collection that will be landing soon in the parks! While visiting any one of Walt Disney World’s four parks, Guests will have a chance to hunt for Disney’s new “Fab 50” character collection. There will be a golden statue for each Disney character included in the Fab 50 lineup that will be spread throughout the Parks, and we’ll have a chance to spot them! The countdown to which 50 characters make it into the “Fab 50” is underway as Disney has now revealed 37 of the 50 character sculptures so far. Check out the newest additions below!

In celebration of the 50th Anniversary, beginning October 1, Guests will have a chance to scavenger hunt through Magic Kingdom, EPCOT, Disney’s Hollywood Studios, and Disney’s Animal Kingdom to virtually “collect” golden Disney character sculptures on Instagram. As the Castle slots (shown in the image below) continue to fill in, Disney has announced #35, #36, and #37 in the “Fab 50” character lineup!

First up, as shared via Disney Parks Blog Instagram stories, L Steven Taylor who plays Mufasa in The Lion King on Broadway announced The Lion King‘s Simba will be included in Disney’s Fab 50 character collection!

And get ready for a Frozen duo! Walt Disney Animation Studios took to Instagram to post: “Jennifer Lee, Chief Creative Officer of Walt Disney Animation Studios has revealed that @DisneyFrozen’s Olaf and Bruni are part of the “Disney Fab 50 Character Collection” that you’ll soon find across the four @WaltDisneyWorld theme parks during “The World’s Most Magical Celebration” starting October 1 #DisneyWorld50”

Welcome to the list Simba, Olaf, and Bruni! We will soon be able to find Simba at Disney’s Animal Kingdom Park. Olaf and Bruni will be available at EPCOT beginning October 1. Here’s the lineup of Disney characters included in the “Fab 50” sculptures thus far:

By our count, that leaves us with only 13 character sculpture reveals remaining! Which Disney characters are you hoping to see added to the 50th Anniversary celebration “Disney Fab 50” lineup? We’ll keep sharing the news about which characters are included as Disney keeps the Fab 50 character collection countdown rolling.