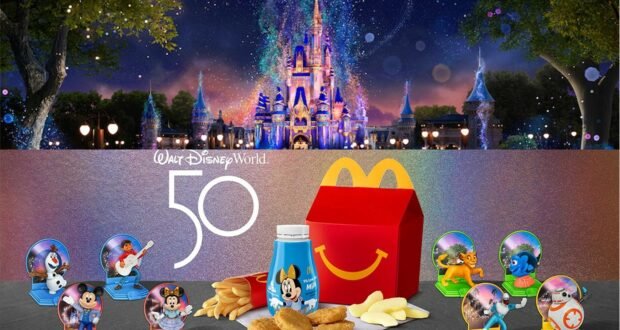 Calling all Disney collectors! While we’ve been making plans to experience the incoming Magic Kingdom nighttime spectacular, “Disney Enchantment“, and EPCOT’s “Harmonious“, we’re also planning several trips to the local McDonald’s in the near future! The golden arches fast-food giant has confirmed they have teamed up with Walt Disney World in time for their 50th Anniversary celebration. Soon, Happy Meal toys will feature the “Fab 50” characters in “Disney’s 50th Anniversary Celebration EARidenscent fashion.” As if a Happy Meal toy won’t have Disney fans excited enough, you’ll also have a chance at winning a free trip to the most magical place on earth!

We previously shared the news according to outside sources that the special anniversary toys were on the way in. Now, McDonald’s has officially made the big announcement., confirming our excitement! Starting September 14, McDonald’s be serving Happy Meals in an EARidescnet box which will include a Disney character featured with Walt Disney World’s “Fab 50”.

Plus, need a FREE vacation to the Disney Park? Trip your luck as McDonald’s diners will have the chance to win a family vacation for four to Walt Disney World Resort’s 50th Anniversary celebration which launches on October 1, 2021, and runs for a full 18-months. Simply order and pay for a Happy Meal via McDonald’s app between September 25 through October 1 to automatically be entered for a chance to win a free trip to Walt Disney World – plus you’ll receive one of the Disney toys. Best of luck, and happy dining, Disney fan!