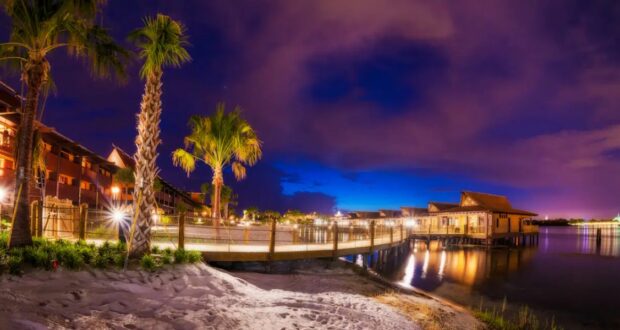 Resort Guests can enjoy a tropical South Pacific theme when visiting one of Walt Disney World Resort’s most Deluxe Resort Hotels, Disney’s Polynesian Village Resort. As we prepare for a new year, take note as Disney has announced another closure ahead for the beloved Resort.

January 2023 is going to be an extremely busy maintenance month for Disney. Just a monorail ride away from the Polynesian Resort, Magic Kingdom Park will have several experiences closed for maintenance, including the Walt Disney World Railroad, Big Thunder Mountain Railroad, Splash Mountain’s permanent closure, and the continued work on TRON Lightcylce / Run.

The Disney Parks aren’t the only experiences to hit the refurbishment plans in January. Work is underway at Disney’s BoardWalk Inn Resort to welcome a new Carousel Coffee location in its lobby, and Disney’s Grand Floridian Resort and Spa is preparing for a full lobby makeover.

Disney’s Polynesian Village Resort is loaded with construction as well. Recently, Disney worked to refurb much of the Great Ceremonial House, including the entrance of the Resort, the lobby, and the newest refurbishment hitting Kona Cafe table-service restaurant. Plus, it wasn’t too long ago that the Polynesian Resort rethemed its rooms with Moana-inspired touches.

Additionally, with the permanent closure of Spirit of Aloha, Disney has decided to erect a massive tower of hotel rooms in the dinner show’s former location.

The Polynesian Tower will offer rooms for Disney Vacation Club Members and is expected to open in late 2024. The tower has, however, been met with some negative feedback as Disney fans are worried the lush oasis that Disney’s Polynesian Resort currently offers will be stripped away with this new “Marriott” tower feeling.

And as construction continues at the site for the Polynesian Tower, Walt Disney World has announced it will be closing its popular Laval Pool water slide in the new year, stating:

To ensure our facilities are maintained to the highest quality standards, we conduct routine maintenance from time to time. The Lava Pool water slide at Disney’s Polynesian Village Resort will be closed for refurbishment beginning Jan. 3, 2023. While Guests may see or hear refurbishment work in the area, the Lava Pool will remain available to Guests throughout the refurbishment; only the water slide will be closed. The Oasis Pool will also be available for use. The water slide will reopen to Guests in early February.

Thankfully, the Lava Pool will remain open, with the 142-foot-long water slide that takes Guests through a volcano feature to be closed until early February.

As always, we will continue to keep Disney Dining readers updated as we learn more about this refurbishment closure at Disney’s Polynesian Village Resort.