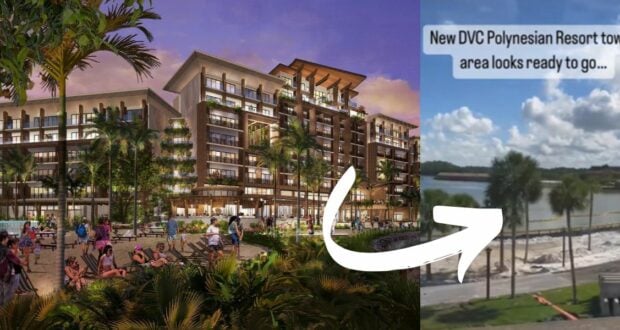 Walt Disney World Resort has revealed that Disney’s Polynesian Village Resort will be experiencing a transformation. What currently looks like a construction zone will one day be a massive tower of hotel rooms.

Not only have we seen structural changes recently to the Polynesian Village Resort’s Great Ceremonial House, but several of its rooms have been refurbished with a Moana (2016) inspired theme. Plus, Kona Cafe has received a facelift, and the beloved ‘Ohana restaurant is now welcoming the return of Lilo, Stitch, and Mickey Mouse for a character breakfast.

With all the changes, there has been one big loss… and that is the nostalgic dinner show Spirit of Aloha. The Disney fandom was extremely disappointed when Disney announced the show would never be returning from its COVID closure.

Instead, Disney revealed plans for new Disney Vacation Club Villas at the popular deluxe hotel. Unlike the renovation of several rooms at Disney’s Grand Floridian Resort & Spa to be DVC rooms for the property, Disney is working on an entirely new structure to house Disney Vacation Club Members and their Guests at Disney’s Polynesian Village Resort.

With the Polynesian Resort’s close proximity to Magic Kingdom Park, hotel rooms are always in high demand. But, the project has been met with some controversy among Disney fans. Why is Disney building more high-priced Resorts but not expanding the Parks? Will the new, modern tower take away from that intimate Polynesian oasis feel the Resort currently offers?

But Disney is pushing ahead!

Permits were filed by Disney for the construction of the Polynesian Resort Villas. The project, located on the shore of the Seven Seas Lagoon, looks like there will be a new parking lot and swimming pool with possibly a kid’s splash area. Disney has also noted there will be a dining and shopping locations within the tower.

Now, we’re sharing the latest video update as we took a Resort Monorail ride past the massive construction site on November 2, 2022. Check out the video below:

Disney has yet to release the official opening date of the new Polynesian Tower but has suggested it would be in late 2024.

Follow us on Disney Dining’s TikTok page for more videos! As always, we will be sure to keep Guests updated as we learn more about this historical Disney Deluxe Resort transformation with the modern tower addition.

2022-11-02
Jamie Sylvester
Previous: Step into the Movies with These Disney Film Moments You Can Live!
Next: Main Street Electrical Parade Returns to Disney World, But Only for a One-Night Engagement