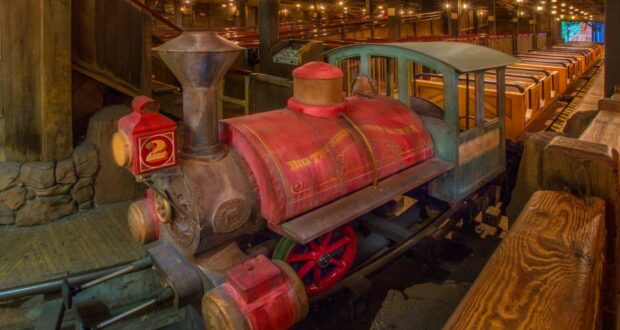 Take note, Disney Park Guests! “The Wildest Ride in the Wilderness” is scheduled to close for refurbishment in January 2023.

If visiting Walt Disney World Resort in January, be prepared, as Magic Kingdom Park will be experiencing a few closures as the new year begins.

Despite the tease of testing and the recent video of the steam train rolling through the TRON Lightcylce Run tunnel, Walt Disney World Railroad is still slated to be closed through January 2023. We suspect the nostalgic railroad that closed in 2018 will reopen in “Spring 2023” with the long-awaited TRON coaster.

We have also learned that Magic Kingdom’s beloved Splash Mountain will permanently close on January 23, 2023, with the last day to ride the Song of the South (1946) themed attraction on Sunday, January 22, 2023.

Splash Mountain’s closure is scheduled as Disney brings to life “Tiana’s Bayou Adventure” in its place.

Now, another Magic Kingdom mountain is preparing for closure.

That’s right, Big Thunder Mountain Railroad in Frontierland will close for refurbishments from January 9 – January 13, 2023. The attraction is removed from the refurbishment calendar as of January 14, 2023. We suspect the brief refurbishment will be minor maintenance fixes.

RELATED: Big Thunder Mountain Movie In the Works at Disney!

Big Thunder Mountain Railroad will likely be an extra popular attraction soon with its neighboring sister mountain, Splash Mountain, closing for the retheme to Tiana’s Bayou Adventure, which is scheduled to have its grand opening in late 2024.

If you’ve never experienced Big Thunder Mountain Railroad, prepare to hold on tight, Disney fans! Disney describes the rollercoaster experience as “the wildest ride in the wilderness” with:

“Legend has it that soon after gold was first discovered here in the 1850s, eerie things began to happen. Trains would take off and race through tunnels—by themselves.”

“After you arrive at the legendary Big Thunder Mining Company, descend into an abandoned mine shaft and board your train. As you enter the cursed cavern, the engine speeds up along the rickety track. Dodge exploding dynamite and falling boulders as you swoop around turns, drop into canyons and dart through the mysterious ghost town of Tumbleweed.”

“Your rip-roaring adventure proves that some legends are true. You’re sure to have a real blast!”

As always, we will keep Disney Dining readers updated as we learn more about the Big Thunder Mountain Railroad closure at the Magic Kingdom theme park.