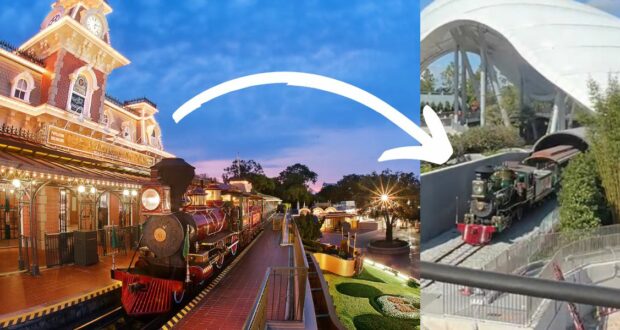 Magic Kingdom Park has been missing one of its most nostalgic rides for over 1,450 days now. The Walt Disney World Railroad closed on December 3, 2018, to make way for the construction of the highly-anticipated Tomorrowland roller coaster, TRON Lightcylce / Run.

Sadly, progress on the TRON coaster has crawled, leaving Disney fans not only eager to know when TRON will open but when we can expect to travel the 20-minute, 1.5-mile scenic round-trip train tour around the Magic Kingdom theme park once again.

While Disney has teased several times that the reopening is “coming soon” for the Walt Disney World Railroad, four years later, we’re still left without a reopening date. Furthermore, we’ve been given hope that TRON Lightcylce Run will open in “Spring 2023.”

The TRON coaster has been spotted being tested recently, as shown in the video below:

But even more exciting is a new video that shows the Walt Disney Railroad on the move THROUGH the TRON tunnel!!

@TouringPlans took to social media to share, “The TRON WDW Railroad tunnel is live!!” Check out the video below:

Is it REALLY finally happening? Seeing the train move through the tunnel is massive progress and likely means we can expect reopening soon.

Currently, the Walt Disney World website still lists the WDW Railroad attraction as “temporarily unavailable,” “… which it has stated for four years. The attraction description goes on to note:

“Listen to the clamor of the engine, the chug of the wheels and the call of the whistle as you travel aboard the Walt Disney World Railroad. Take your seat on 1 of 4 meticulously restored, vintage narrow-gauge steam trains—originally built between 1916 and 1928—and enjoy a relaxing 20-minute, 1.5-mile scenic round-trip tour. It’s a convenient—and nostalgic—way to get around Magic Kingdom park!”

“Find a Station: You can board or disembark at any of 3 stations: Near the entrance to the park on Main Street, U.S.A.; The Frontierland station; and The Fantasyland station.”

As always, we will keep Disney Dining readers updated as we learn more about the Walt Disney World Railroad reopening, as well as information about TRON’s Spring 2023 grand opening.