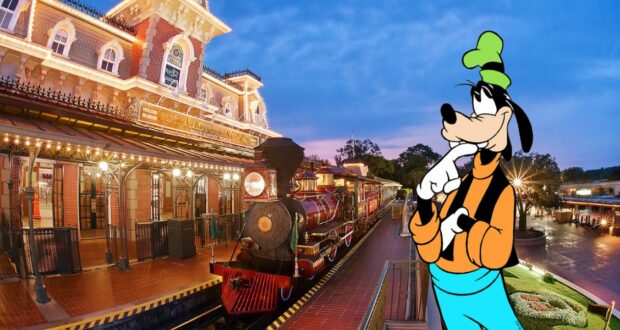 Walt Disney World Railroad Returns, but Not at Magic Kingdom

The iconic Walt Disney World Railroad at Magic Kingdom Park has been closed for over 1,400 days. As the Disney fandom grow impatient waiting for the nostalgic attraction to return, a few Resort Guests got creative.

A COVID pandemic, and years later, Disney Park Guests are still waiting for not only the grand opening of TRON Lightcylce Run (Spring 2023), but more importantly for some, the return of the Walt Disney World Railroad.

As shown in the video below, we have thankfully seen progress on the train tracks moving through TRON:

Disney has also teased for a second time now that the Walt Disney World Railroad has begun testing… an announcement they previously made in March 2022. But, alas, Disney hasn’t revealed when the locomotives will return to the Main Street, U.S.A. station, or others.

So, what’s a Disney fan to do? Make their own, of course!

On Halloween night, October 31, 2022, Guests staying at Disney’s Fort Wilderness and Campground had a golf cart parade where Resort Guests went all out with the designs.

While the Monsters, Inc. (2001), Zero from The Nightmare Before Christmas (1993), the villainous Cruella de Vil from 101 Dalmatians (1996), and the impressive Star Wars AT-AT Walker were exceptional… the show stopper was the Walt Disney World Railroad!

Now, if we can just get Disney to get its own Walt Disney World Railroad up and running, the Disney fandom will rejoice!

As always, we will be sure to keep Disney Dining readers updated as we learn more about the future of the beloved Walt Disney World Railroad.