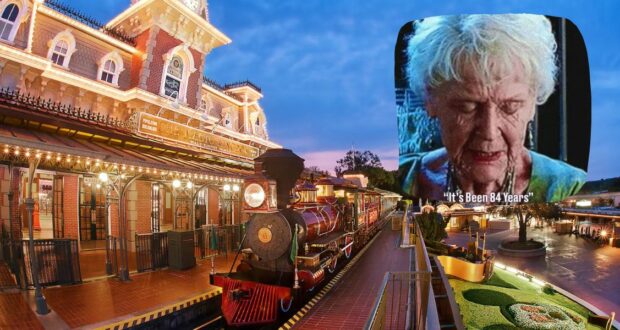 Hang in there, Disney fans! It may have seemed like an eternity… but we’re FINALLY seeing some signs of the potential return of the Walt Disney World Railroad at Magic Kingdom Park.

Little did we know at the time that a pandemic was on the way, and when COVID-19 hit in 2020, it seemed to stop several Disney projects, including the slowing of construction on the TRON Lightcylce Run.

While we now know Disney anticipates opening TRON in “Spring 2023,” the construction is still crawling along in Magic Kingdom, which has impacted the beloved train attraction. Thankfully, we HAVE seen progress on the train tracks that will tunnel through the new roller coaster. Check out the TRON and train track progress in the video below:

And now, over 1,400 days since the December 2018 closure of the Walt Disney Railroad, we are seeing a steam train on the tracks, seemingly in testing mode!

@rjplansyourvacations took to social media to share a video with the note, “We saw this as we were going to our reservation today. How cool?!?!?”

The description of the Walt Disney World Railroad hasn’t changed as Disney describes the experience with:

“Listen to the clamor of the engine, the chug of the wheels and the call of the whistle as you travel aboard the Walt Disney World Railroad. Take your seat on 1 of 4 meticulously restored, vintage narrow-gauge steam trains—originally built between 1916 and 1928—and enjoy a relaxing 20-minute, 1.5-mile scenic round-trip tour. It’s a convenient—and nostalgic—way to get around Magic Kingdom park!”

“Find a Station: You can board or disembark at any of 3 stations: Near the entrance to the park on Main Street, U.S.A., The Frontierland station, The Fantasyland station.”

The hope is the locomotives will be back up and chugging along before the TRON coaster opens in Spring 2023. We will be sure to keep Disney Dining readers updated as we learn more about Disney Park fan favorite finally reopening.