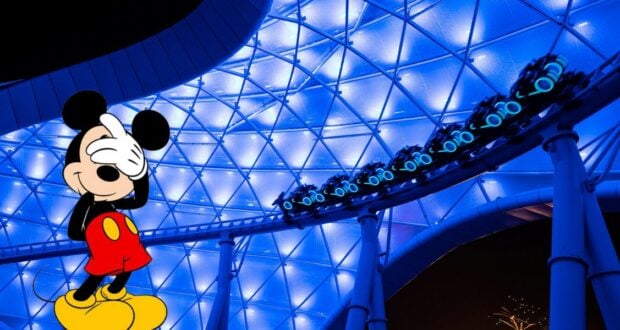 Disney’s TRON Is “Showing Its Age,” and It’s Not Even Open Yet

A video has surfaced showing the highly-anticipated Magic Kingdom Park roller coaster, TRON Lightcylce / Run, “showing its age” before it even has a chance to open to the Park Guests.

Did you know the entire Magic Kingdom Park took four years to build? That’s four years to build an ENTIRE theme park back in the late 1960s and early 1970s. Fast-forward to 2018, when construction began on the single roller coaster attraction, TRON Lightcylce Run. Now, almost FIVE years later, we’re still waiting for it to open.

RELATED: What the Heck is Taking SO LONG with the TRON Attraction at Magic Kingdom?!

While we have seen progress, the TRON coaster in the Tomorrowland portion of the Disney Park has been a construction eyesore for years. Even though Disney already has its sister blueprints from the successful ride at Shanghai Disneyland Park… the progress seems to be at turtle speed at Walt Disney World Resort.

Of course, the COVID-19 pandemic didn’t help with the attraction’s construction success for Walt Disney Imagineering, but even if we cut a year out of the equation due to the pandemic, we’re still talking a LONG time to finish one ride.

And before the attraction can even open to the public, signs of its aging are shining through.

@waltdisneyworldparks took to social media to share a clip and noted, “Tron Lightcycle Run Show Building at magic kingdom is already showing it’s age, at this rate the ride will have to close for refurbishment before it opens in 2023.” Check out the video below:

And yes, it has taken FOREVER. Thankfully, we’ve seen progress on the Walt Disney World Railroad tunnel and track as well, as fans are eagerly awaiting the return of the train, which has been closed since 2018, to make way for TRON’s construction. Check out the video below to see the latest progress:

At the 2022 D23 Expo, The Walt Disney Company announced it would be opening TRON Lightcycle Run “Spring 2023.” Once Disney reveals an official opening date, we’ll be sure to share the news with all the Disney fans eager to experience this already now almost 5-year-old attraction.