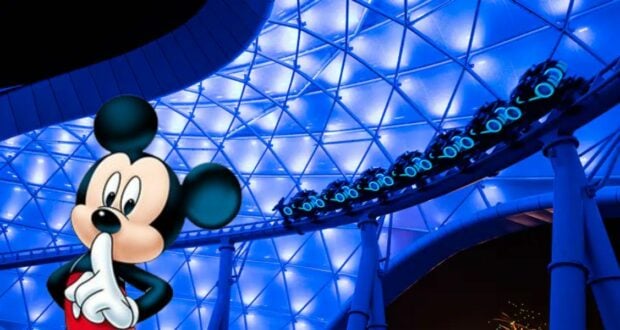 The Disney buzz is surrounding TRON, the new rollercoaster scheduled to be ready for Disney Park Guests in Spring 2023. The attraction began construction in 2018, and Disney fans have been impatiently awaiting its arrival.

Thankfully, good signs point to TRON’s progress as construction moves along. We’ve seen testing, as well as testing of an alternative seating option for motorcycle-style ride vehicles for the roller coaster.

Now, a leaked video has Disney fans thrilled to finally see a glimpse inside the attraction inspired by the 1982 version of TRON, with an updated sequel to the iconic film in 2010, TRON: Legacy.

How was this leaked video captured?

@BackDoorDisney notes, “PSA: BackDoorDisney does not condone any behavior in which guests or anyone else trespass or enter areas where they aren’t supposed to be. It is both dangerous and careless. We love behind the scenes content, but it has to be done the right way. Just putting this out there. -BDD”

Furthermore, the Twitter account makes it clear, “We do not work for the Disney company or affiliated with them in any way. DM’s are open. ALL SUBMISSIONS REMAIN 100% ANONYMOUS.”

We aren’t sure how this video was captured and shared on social media, but with the amount of Cast Members and construction workers visiting the attraction, we suspect someone took the opportunity to seize the moment and share an inside look.

As always, we will be sure to share more details as we learn about the highly-anticipated TRON Lightcycle Run Tomorrowland rollercoaster opening in Spring 2023. In the meantime, check out the ride video experience of its sister attraction in Shanghai Disneyland Resort below:

We so can’t wait to experience this attraction at Magic Kingdom Park in 2023!