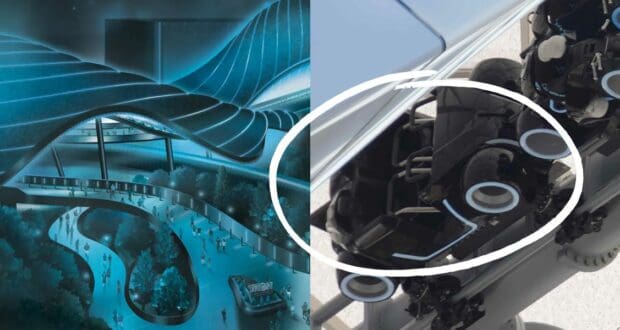 Alternative Seating Option to Be Available on TRON Coaster

As Walt Disney World Resort continues to prepare for the opening of TRON Lightcylce Run at Magic Kingdom Park, we’re seeing alternative seating being tested for the highly-anticipated roller coaster.

It’s hard to believe that construction of the TRON Lightcycle Run coaster in the Tomorrowland portion of Magic Kingdom began in 2018. Now, with the news of the attraction FINALLY opening in “Spring 2023,” Disney Park Guests will have waited five years for the opening of the ride.

While yes, that’s longer than it took to build the ENTIRE Magic Kingdom theme park, we have high hopes that this Shanghai Disneyland Resort sister attraction will be well worth the wait.

With construction progress crawling but still underway, we’ve recently seen testing taking place for the TRON coaster, which will feature a leaning forward, motorcycle-style seat for riders, as shown in the video below:

Now, it looks like Disney is, however, preparing for Guests of all shapes and sizes with a traditional lap bar seating option being tested.

@bioreconstruct took to social media to share, “Most guests will ride Tron leaning forward as if in a Light Cycle. These guests are secured with a backrest that presses forward. There is a normal upright roller coaster seating option too. Traditional lap bar seating, in the last car.”

Check out the image of the traditional lap bar seating in the last car below:

All coaster seats will have a back restraint, with the exception of this last ride vehicle which will be an optional alternative seat for Guests.

Want to take a ride on Shanghai Disneyland’s TRON coaster to get ready for Magic Kingdom’s big reveal? Check out the video below:

Walt Disney World describes Magic Kingdom’s version of TRON as what will be one of the fastest coasters at any Disney theme park in the world:

“Lean forward into the ultimate race of survival! Leave the real world behind and join Team Blue in an epic quest across the Grid—the dark, computerized world with no horizons from TRON. Here, there’s no limit to the excitement.”

“Climb aboard your very own Lightcycle and take off on a high-speed adventure, racing against the Grid’s most menacing Programs. Surge past your fierce opponents as you attempt to cross through 8 Energy Gates and secure your team’s victory—so you can survive to race another day.”

As always, we will continue to keep Disney Dining readers updated as we learn more about a grand opening date for the “Spring 2023” TRON Lightcycle / Run.