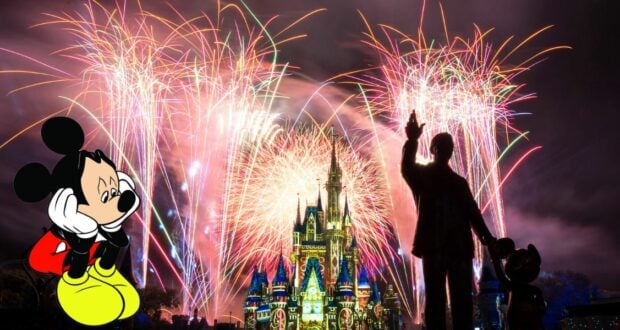 Reached a Disney “Breaking Point?” Ways to Combat the Notion

Dearest Disney fans… we hear you. The recent days, months, (and, dare we say, years?) haven’t been the easiest for the Disney fandom. The verbiage “breaking point” seems to pop up left and right on Disney blogs and chat groups. Do you feel like you’ve reached your Disney “breaking point?” Here are ways that may help to combat that notion.

We completely get it. When Walt Disney World Resort and Disneyland Resort closed due to the pandemic, it seems Disney used the phased reopening timeline as a chance to push the reset button on several fan-favorite experiences.

Once complimentary services such as Disney’s Magical Express and the FastPass+ system disappeared. The flexibility of Disney planning is no more with the new theme park reservation system. Ticket and Resort prices have become hard for middle-class families to manage. And the volume of displeased Disney fans is resounding.

Just this week, we’ve seen ticket prices climb, a Disney Genie+ service pricing hiked up, individual Lightning Lane pricing increase, Disney experiences cost more, and food and beverages pricing rise. When all we want to think about is Mickey Mouse and pixie dust, it’s hard not to let this news put a damper on the magic.

In the midst of price hikes, open-ended promises keep flooding in from Disney. From the TRON Lightcycle Run Magic Kingdom roller coaster that will have taken six years to build to the missing “Fantasmic!” return date at Disney’s Hollywood Studios… sometimes the frustration of it all is hard to handle.

Meanwhile, fans just really want some simple answers to questions such as “When is the Disney Dining Plan going to return?”, “What DATE in Spring 2023 will TRON be opening?”, “Is this D23 talk of “what if” ideas just talk, or can we REALLY expect a Villains Land?”, and “When can we Park Hop before 2:00 pm again?”

The Disney fandom blames the CEO Bob Chapek, the economy, the Cast Members, The Walt Disney Company, the “Disney Adults,” and pretty much anyone and anything we can to try to get a better understanding of what is going on.

As much as we LOVE Disney, the frustration is inevitable for any Disney fan to juggle all these elements at once. So, we’ve come up with a few ways to combat that “breaking point” notion so prominent on social media.

MANY of the complaints right now are dealing with Disney’s upcharge line-skipping service, Disney Genie+. The service is practically the same as the former FastPass+ service but now costs money. It started at $15 per person per day, but Disney has dropped that sticker price and has said the amount will “vary by date.” The next day Genie+ was $20 per person.

If Genie+ is causing you a headache… don’t bother with the hassle of the system. Expect to wait for attractions in the standby line as usual. Tackle the popular rides first to avoid long wait times, and do your best to manage the wait. Disney only promises 2 to 3 attractions to be included with Genie+ anyway, so if it’s a bothersome thing for you… leave it be!

Gone are the days of the Disney Resort Guest perks such as complimentary MagicBands and Disney’s Magical Express. Instead of paying the Disney Resort pricing, check out surrounding hotels to see if they are best suited for your family.

Just be sure to include in the budget parking at the Disney theme parks unless the local hotel offers a Disney Park shuttle.

Bring Your Own Food

Disney’s food prices are on the rise! Beat the stress of Disney’s food prices by planning to bring your own food into the Parks. Sandwiches, chips, apples, etc., all make for a perfect Park bite. Be sure to also bring a refillable water bottle along with a snack to keep the kiddos happy!

If you do want to dine at Disney, go the quick-service route over the table-service pricing. If a character meal is something you’d like to do, reserve a breakfast instead of a lunch or dinner, as breakfast is usually much cheaper.

Don’t worry about purchasing the extras, such as the upgraded MagicBand+. You can also skip out on purchasing Park Hopper tickets since Guests can’t Park hop until 2:00 pm anyway. PhotoPass is fun, but just have your phone charged and snap your own photos. Ignore the extras that may impact the budget.

If you’ve been to Disney since pre-COVID (2020) days… it’s hard to say this, but it’s time to lower your expectation. Things have changed. The Disney Park atmosphere is different but still magical in many ways. Don’t expect what took place in 2015 to be the same experience you’ll find today.

“The important thing is the family.” – Walt Disney

We’ll be the first to say that we aren’t canceling any of our Disney trips. We go as often as we can! But, for some, a break may not be a bad idea.

RELATED: Moving to Disney World is the Best Thing We’ve Ever Done

Orlando and Central Florida are beautiful and filled with plenty of exciting opportunities for all ages. Maybe it’s time to break that “Disney bubble” and expand your family’s Disney vacations with a day or two exploring the surrounding area.

Focus on the Good

“Happiness is a state of mind. It’s just according to the way you look at things.” – Walt Disney

With negative news, it’s easy to forget the GOOD. Focus on the Disney pieces you love! Watch nostalgic Disney movies. Enjoy new attractions such as EPCOT’s Guardians of the Galaxy: Cosmic. Slow down and stroll Main Street, U.S.A., instead of rushing for a ride. Let the family spend the day swimming in the Resort pool.

Look for memorable moments that don’t have to be among the crowds, the stress, and the woes. Keep looking for the good in the Cast Members and smiling Guests. The magic is still very much alive in the Disney Parks!

As with any valley, there are mountain tops nearby! How and when may still be unknown, but these moments of Disney woe will come to an end. If you’ve reached that “breaking point” and have lost that magical Disney spark that ignites the butterflies in your stomach… it will be back.

2022-10-13
Jamie Sylvester
Previous: Angry Fans React To Yet Another Disney Price Hike
Next: This “it’s a small world ” Fan Theory Will Creep You Out