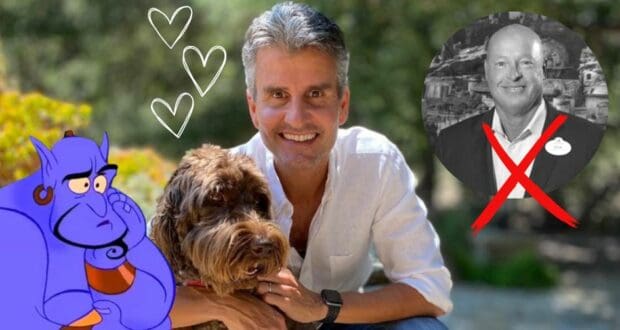 Does the Chairman of the Disney Parks Get Off Easy Because of His LOOKS?

The Walt Disney Company has been making some big moves lately. Since the COVID closures in 2020 and the phased reopenings of the Disney Parks to follow, we’ve seen a spiral of changes which include price hikes and the removal of beloved experiences.

While everyone seems to be on the Disney CEO Bob Chapek hate train… is Josh D’Amaro, Chairman of Disney Parks, Experiences, and Products, getting off easy because of his looks?

In 2020, Bob Chapek succeeded Bob Iger as CEO of The Walt Disney Company. On May 18, 2020, D’Amaro succeeded Chapek as Chairman of Disney Parks, Experiences, and Products.

RELATED: Dinoland is Going Extinct. Josh D’Amaro Gives Details for What Comes Next

With D’Amaro’s 22-year career with The Walt Disney Company, it’s no question that he knows the ins and the outs of the company… and his voice is obviously heard.

Not only does just play an intricate role in the decision-making process for the Disney Parks, but he has been a huge supporter of Disney Genie, which included removing the complimentary FastPass+ system to now include the upcharge Disney Genie+ and a la carte individual Lightning Lane attractions.

With the news of Genie+ and individual Lightning Lane price hikes… why is everyone blaming the CEO Bob Chapek when Josh D’Amaro is the one in command of that branch of The Walt Disney Company? Fans are recently sharing it may be because of D’Amaro’s looks and personality.

Check out the photo below posted to Josh D’Amaro’s Instagram. Here he smiles with his four-legged friend, Lincoln:

Actually, his social media account is filled with his beaming smile, as it should be. He’s known to be a very personable and friendly Chairman, as he’s been spotted in the Parks and is always willing to stop for a handshake or photo.

But some believe “Zaddy McSkinnyJeans” (referring to Josh D’Amaro) is getting off way too easy with all these Disney fans’ woes, while Bob Chapek takes all the heat.

@cabel took to social media to share, “Josh D’Amaro is the luckiest executive alive. He’s the literal chairman of Disney Parks. He has to be the one making the calls on Genie+’s wild new pricing systems, the reservations, the confusion, the gouging. But because he’s Zaddy McSkinnyJeans, Bob Chapek gets all the hate…”

Others point out that it’s Josh D’Amaro’s “hot” looks that help him dodge the criticism:

Another says it’s not just D’Amaro’s looks saying, “It’s not just that, but it’s also just that he’s better at PR than Chapek. He’s very personable and likes to talk to guests and the Cast Members (I was a CM very briefly and oh BOY do they hype up how good D’Amaro is to the CMs in Traditions).”

We aren’t sure who is to blame for price hikes and disappointment in the Disney Parks, and we honestly don’t mind who is hotter. The BEST solution would be if Bob Chapek and Josh D’Amaro could figure out a way to keep the Disney fandom (and their budgets) happy on their next magical Disney vacation.