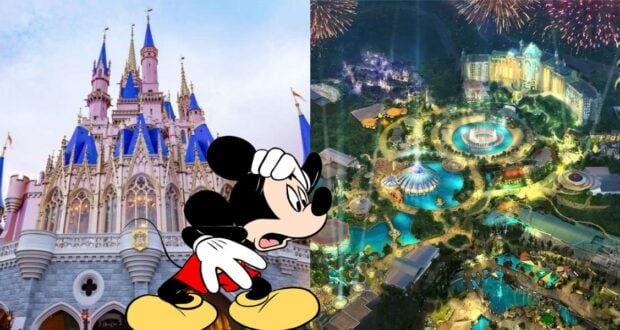 Two theme park hot spots in Central Florida are in a never-ending battle for Park Guests. The neighboring competitors of Walt Disney World Resort and Universal Orlando Resort are digging deep as Universal unleashes a new approach to its vacation destination.

It’s no secret we are HUGE Disney fans. We’ve visited Walt Disney World Resort repeatedly and can’t get enough of the magic. While we may be Disney Passholders, would it surprise you to know we are Universal Orlando Passholders as well?

RELATED: Fans are Excited about Universal’s Newest Attraction, Look Forward to its 2023 Opening

Disney Is Ahead, but Not for Long

But here’s the kicker… Walt Disney World Resort has always had the upper hand. With double the amount of Parks, Resorts, and experiences, Disney wins out for that true family vacation destination.

Yes, in addition to its Parks, Universal has its CityWalk shopping and dining district along with Volcano Bay Water Park, but Disney has Disney Springs and TWO water parks, Blizzard Beach and Typhoon Lagoon.

RELATED: Universal Has a Disney Problem

A Guest visiting Universal’s Parks will quickly find much of the experience can be tackled in a two-day period. But… that’s all about to change.

The Universal Resort is operated by Universal Parks and Resorts, a division of Comcast’s NBCUniversal. On October 27, 2022, Comcast shared its third-quarter earnings report with some Park highlights.

As shared by @AshleyLCarter1 on social media, the Comcast CEO, Brian Roberts, stated: “I’m especially excited for Epic Universe to open in the summer of 2025, which will transform Universal Orlando into a weeklong destination.”

That’s right! Did you catch that “weeklong destination” terminology? Waiting in the wings is Universal’s brand-new theme park called “Epic Universe,” which Universal has deemed “The Most Immersive and Innovative Park We’ve Ever Created.” Universal goes on to describe the new theme park as:

“Universal’s Epic Universe will offer an entirely new level of experience that will forever change theme park entertainment. Guests will venture beyond their wildest imagination, traveling into beloved stories and through vibrant lands on adventures where the journey is as astounding as the ultimate destination.”

Yes, Disney has reported “what if ideas” that include the expansion of Magic Kingdom lands featuring Encanto (2021), Coco (2017), and a Villain’s land, but these are just blue sky LANDS vs. an entire, confirmed theme park. Disney’s EPCOT is also under transformation, but with trimmed projects, it seems like Walt Disney Imagineering may be missing the bigger picture.

Even if Walt Disney World FINALLY decides to build a fifth theme park instead of focusing its efforts on new Resort Hotels, we’re fairly certain at the construction speed it currently holds, we are MANY YEARS away from completion for a project such as a new Park.

The size will be a huge factor in this Disney vs Universal neighboring competition for Orlando vacationers’ attention.

Epic Universe will feature the theme park attraction experience on its 750 acres, including an entertainment center, hotels, shops, restaurants, and more.

Epic Universe is currently scheduled to open in the summer of 2025. THIS is when the real competition will begin as Universal transforms into a “weeklong destination.” Will this Disney Annual Passholder and Disney Vacation Club member be spending a week with Universal? You better believe it!

2022-10-27
Jamie Sylvester
Previous: Disney Announces Testing to Begin on Railroad (again) but Fans Aren’t Buying It
Next: Future of Reedy Creek May Be Decided Sooner Than We Thought