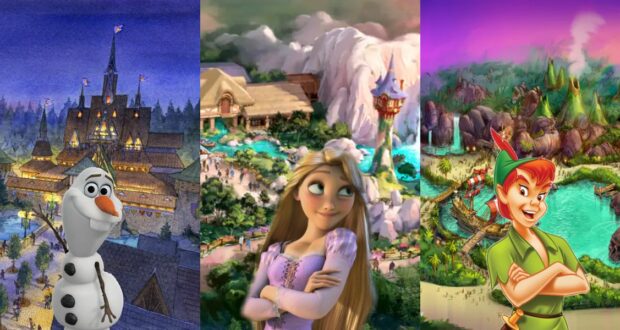 Calling all Disney fans! Disney has announced the names and details of three new immersive worlds that will especially warm the hearts of Frozen (2013), Tangled (2010), and Peter Pan (1953) film fans. These animated Disney classics will come to life soon at one Disney Resort.

Talk of expansion at Walt Disney World Resort’s Magic Kingdom Park was a highlight at the 2022 D23 Expo. While Disney World is floundering with the ideas of adding lands featuring Encanto (2021), Coco (2017), and a Villain’s land, Tokyo Disney Resort is taking big steps to bring its next projects to life.

The Disney theme park, fully owned and operated by The Oriental Land Company under a license from The Walt Disney Company, has announced: “We’re thrilled to finally share the names of the three immersive worlds you will discover at Tokyo Disney Resort’s NEW port, Fantasy Springs, in Tokyo DisneySea: Frozen Kingdom, Rapunzel’s Forest, and Peter Pan’s Never Land.”

Let’s dig deeper below to learn more about the different experiences each of the three lands will offer.

Imagine a Disney land with warm hugs and lots of “Let It Go!” While Walt Disney World has announced the addition of Frozen elements to its soon-to-reopen Blizzard Beach Water Park, Tokyo Disney is opening an entire land.

Disney Parks Blog describes the new land as, “Set after the events of “Frozen,” snow-capped mountains featuring several cascading waterfalls will tower over this quaint village. In the distance, Elsa’s snow-covered ice palace will glisten proudly as you step into the all-new immersive world of Frozen Kingdom.”

RELATED: A “Tangled”-Themed Ride in the Works Featuring Rapunzel

It’s going to be the “BEST. DAY. EVER!” every day in Rapunzel’s Forest. Disney describes the new Tangled-themed land as:

“Rising from the ground, the tower where Rapunzel lived as a child will overlook this new area. At night, it will illuminate the surrounding forest in addition to lamps lining the paths, a glowing restaurant and boathouse windows with lanterns hanging from the boats.”

Walt Disney World’s Magic Kingdom may have Tangled-themed bathrooms, but this land will do the beloved film justice!

A place you never need to grow up! Disney has announced Peter Pan’s Never Land with the above and below art renderings along with:

“With just a little bit of pixie dust, join the ranks of the Lost Kids, explore a pirate ship, dine in a secret hideaway, confront pirates or visit Pixie Hollow, the fairy valley where Tinker Bell lives.”

We love the pirate ship and skull lagoon! Even Wendy would have to approve of this land.

As the sixth Disney Hotel in Japan, the Tokyo DisneySea Fantasy Springs will be the one to stay at. It will be situated near this new Fantasy Springs area, allowing for Park views. Plus, accessing the lands from the Resort will be extremely easy with the close proximity.

The hotel will also “feature paintings depicting Disney Princesses as well as floral motifs throughout the interior of the hotel.”

The Frozen, Tangled, and Peter Pan expansions are scheduled to open in Spring 2024, so start planning your Tokyo Disney Resort vacation now!