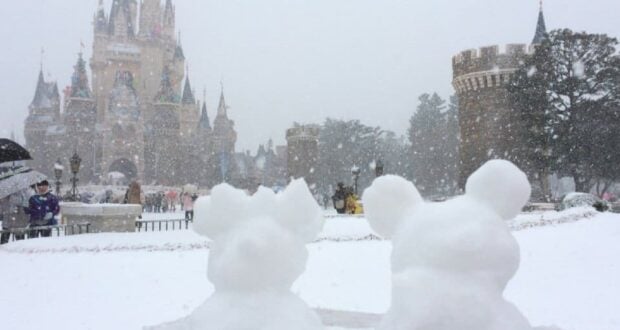 Whether you’re visiting Walt Disney World in Florida or Disneyland in California, Disneyland Paris or Shanghai Disneyland, Disney Parks across the globe are full of magic and built with pixie dust.

But earlier this month, Guests of the Tokyo Disney Resort in Japan got to experience a special kind of magic, and instead of pixie dust, the Resort got a dusting of a different kind–a dusting of snow!

TDR Explorer, whose real name is Chris, is a frequenter of the Tokyo Disney Resort; after all, he is the TDR Explorer. He is originally from Saskatchewan, Canada, but made the move to Tokyo a few years back. In a post on his website, TDR Explorer says that snowfall in Tokyo is not a very common occurrence. 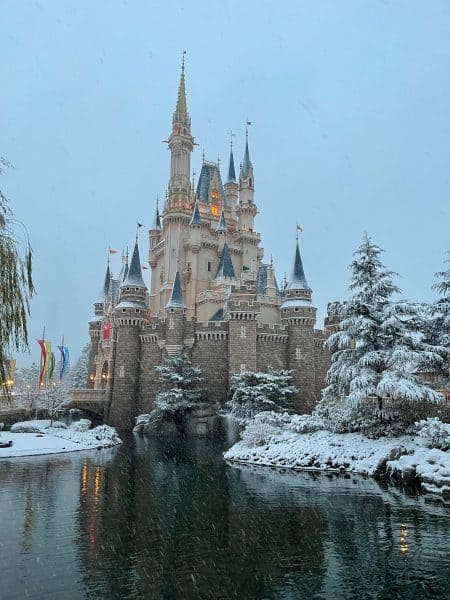 “Snow is a rare sight at Tokyo Disneyland and Tokyo DisneySea. However, today snow began to fall in Tokyo! Explorer Satoshi happened to be at Tokyo Disneyland when the snow began falling,” his post reads. “While it doesn’t snow often, the best chances for snow are between November and February. The snow doesn’t stick around for long and usually disrupts transportation. But, it does make for some fun photos!” 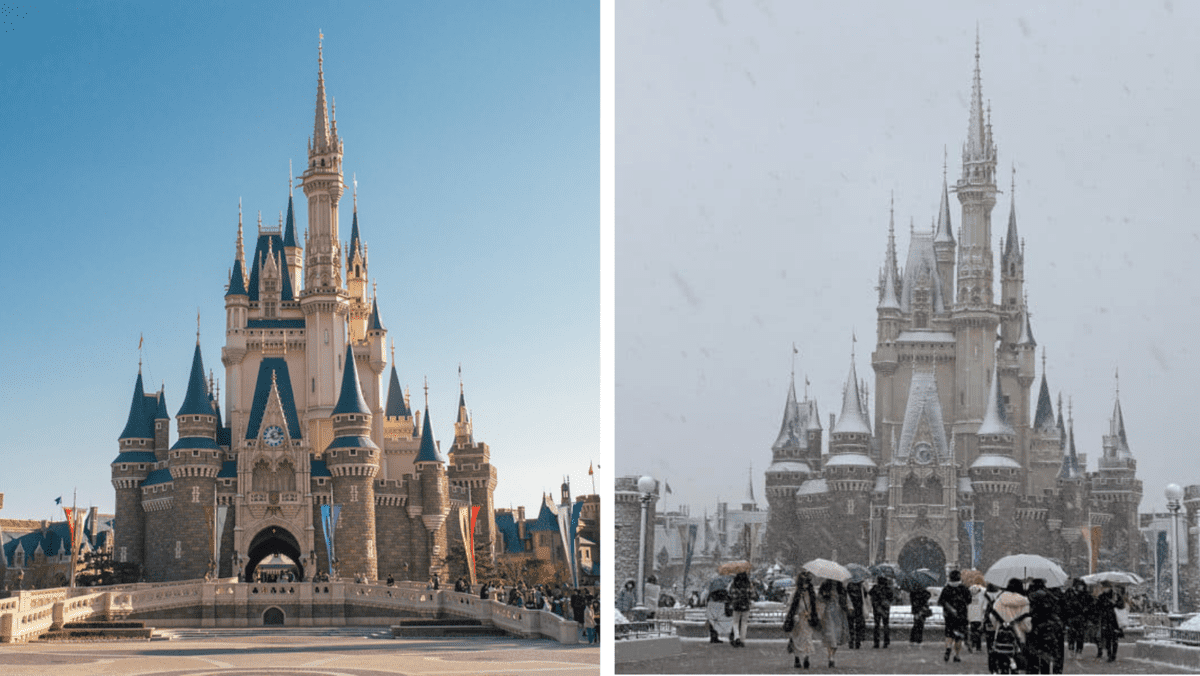 According to TDR Explorer, though it doesn’t happen often, snow has fallen at the Disney Park in Tokyo before: in 2018, 2016, and in 2014. In 2014, Tokyo Disney Park lay right in the path of a winter blizzard. Though that might sound a little scary, the photos of the 2014 Tokyo snowfall in the parks tell the real story: it was a sight to behold!

RELATED: Here are 10 Reasons to visit Disney World this winter

TDR Explorer says there were Mickey Snowmen all throughout the park; Cast Members were making them as the snow fell! What a great photo of Mickey and Minnie as snowpeople, and the shot of Cinderella Castle behind a curtain of falling snow is breathtaking! 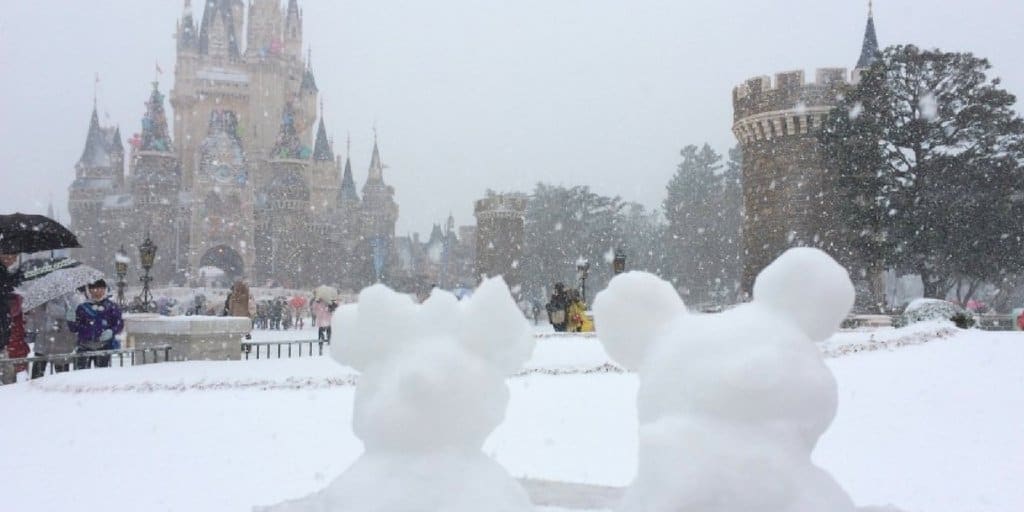 In 2014, Tokyo Disney Resort was celebrating its 30th anniversary. The park was decorated for a celebration of celebrations, but many of those celebratory pieces and elements that adorned the park, its buildings and its fixtures dotted the snow blanket that lay over the park. Guests could see a pop of color here, a pop of color there. The photos show just how beautiful and festive the park looked in the snow, as if it were planned for the 30th anniversary celebration!

RELATED: Disneyland Paris begins preparations for its 30th anniversary celebration by revealing a new logo for the festivities 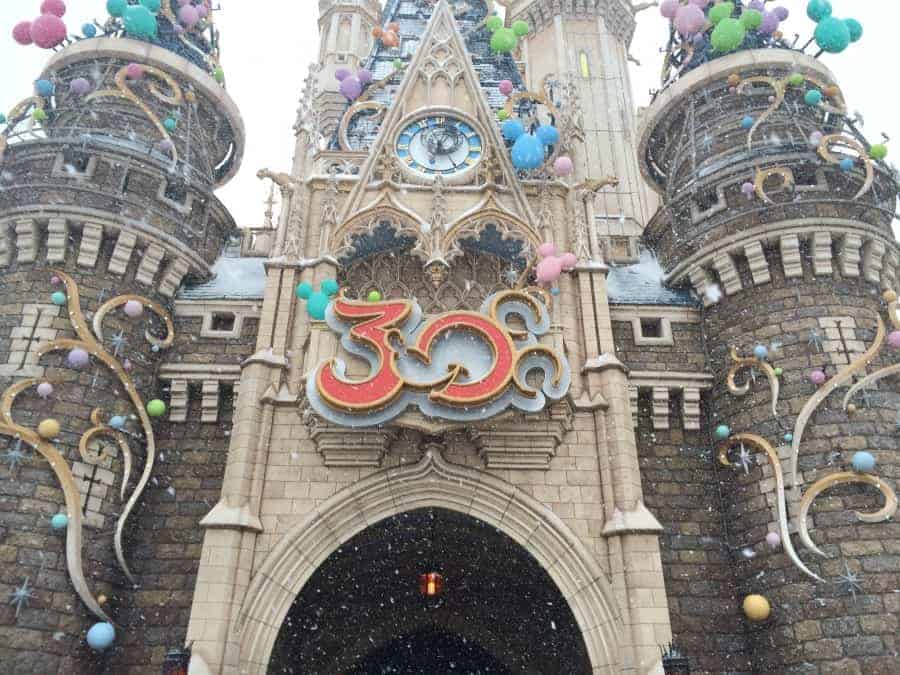 Just look at all those Mickey balloon decorations in the snow! Mickey, Minnie, and the gang seem to be enjoying the wintry wonderland surprise as well! This set features the words, “The Happiness Year,” and we think we can see why! 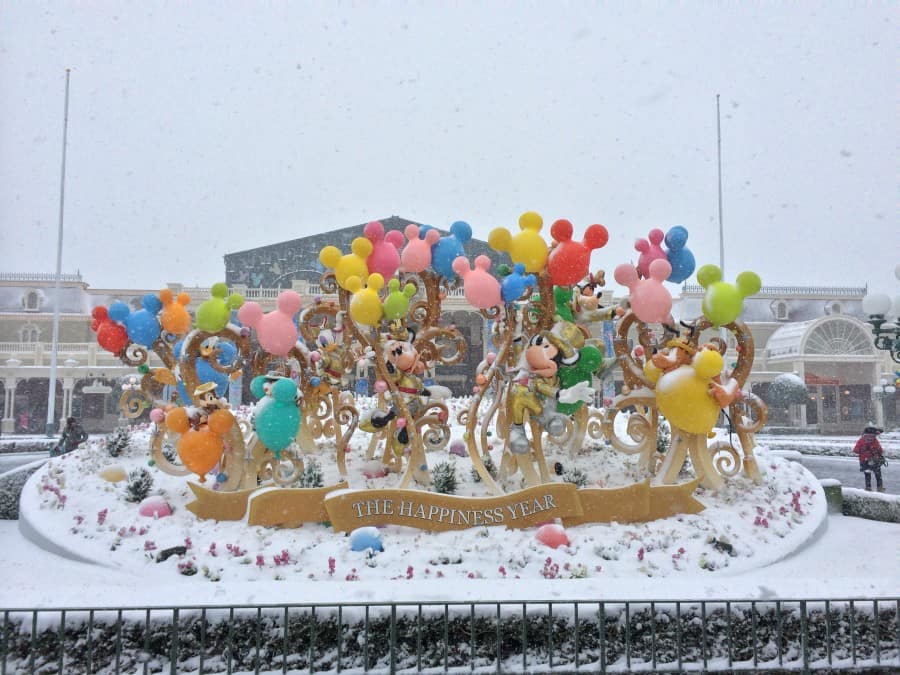 At the Disney Tokyo parks that year, the “it’s a small world” attraction could have easily been renamed “it’s a wintry world,” even if it were just for a day or two.

RELATED: Not a joke and kinda horrifying: Dolls in “it’s a small world attraction” have to get routine haircuts because their hair keeps growing! 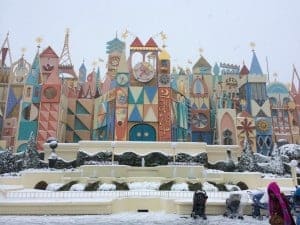 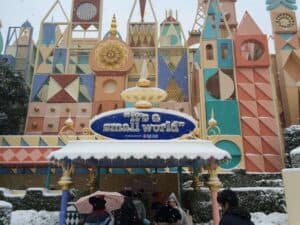 The Explorers were able to capture some unbelievably beautiful photos of this year’s snowfall at Tokyo Disney Resort as well, and their photos are just as beautiful as those from 2014, if not more so! Take a look! 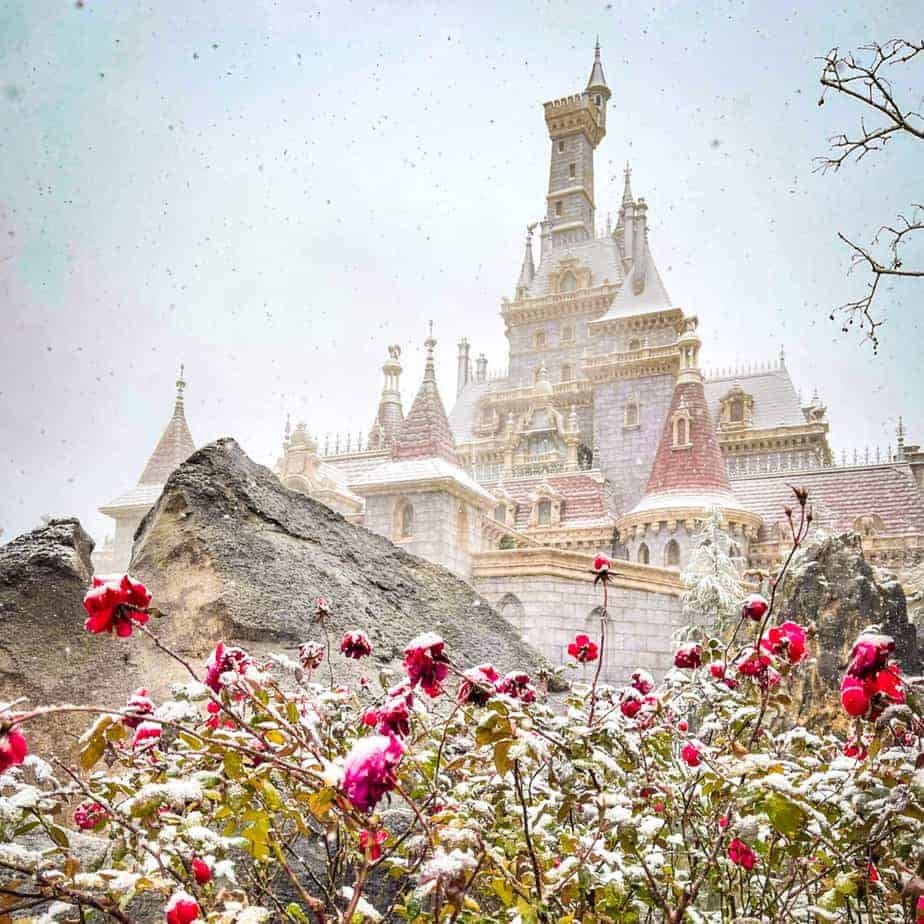 And the frosty Phantom Manor attraction at the Tokyo Disney Resort hardly seemed haunted at all! Look at those enormous snowflakes in the foreground! 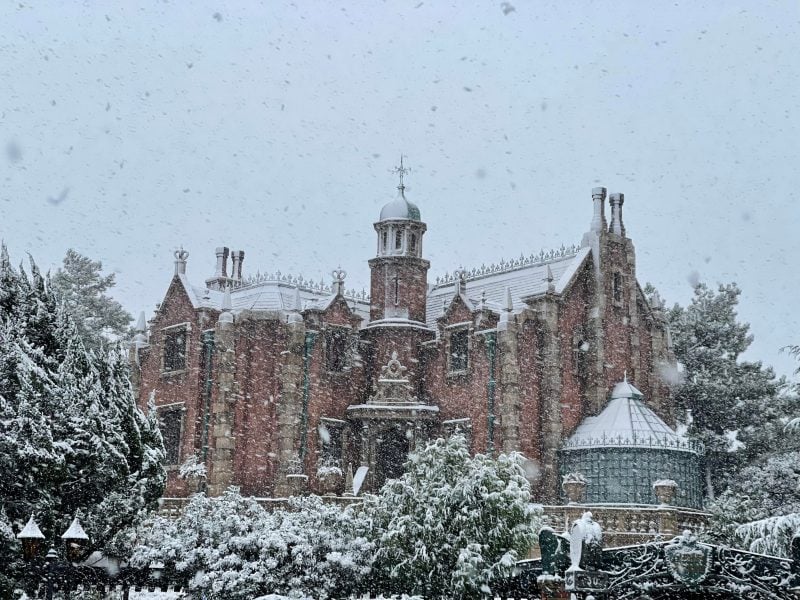 In this photo of the Partners statue, you can see just how much snow had already fallen when you look at Walt’s sleeve and Mickey’s head. And this wasn’t the end of the snowfall! 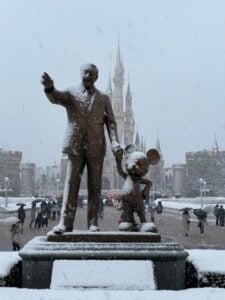 RELATED: A brand-new “Toy Story”-themed Resort hotel will open to Guests at this Disney Park in April 2022

This photo of the castle in the background and the minimal glow of the lamplights in front of the royal structure give the park a certain wintry ambiance. It’s just beautiful! 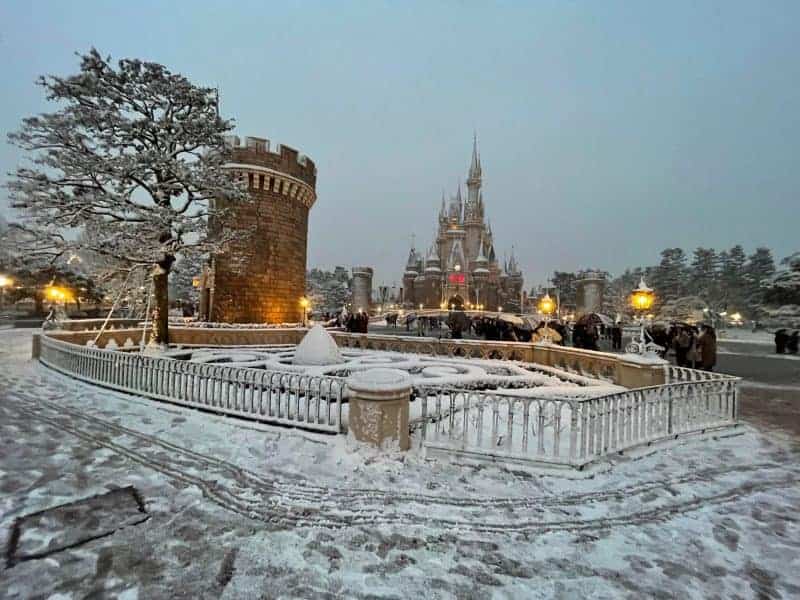 RELATED: Disney World at 50: A Look back at Cinderella Castle over the years

Whether you’re looking to visit the Tokyo Disney Resort in the winter, spring, summer, and fall, TDR Explorer is the one to consult! You can find his site here, and you can also follow him on Instagram and Twitter.