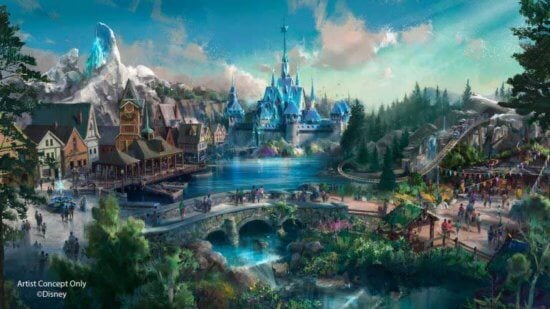 It’s been 5 long years since Disney first announced its plans for a new Frozen-themed land at one of its parks outside the United States. 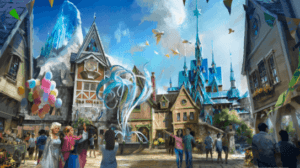 Since then, Guests who love Hong Kong Disneyland (and those of us who have a trip to Mickey’s house in Hong Kong on our bucket lists) have been anxiously and excitedly awaiting news about the new land and about the brand-new centerpiece attraction that’s planned for it.

When speaking about the new Frozen-themed land, called “Arendelle: The World of Frozen,” at the 2019 D23 Expo, now-CEO of the Walt Disney Company, Bob Chapek, sounded even personally excited about the new addition to the Hong Kong park.

“Soon Guests will be able to visit the kingdom of Arendelle with all of its sights, sounds, cuisines, and traditions,” he explained. 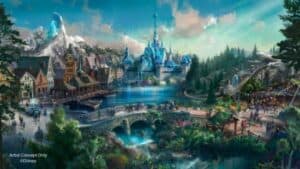 Now, in 2021, the dreams, plans, goals, and hopes for the new land are slowly coming to fruition.

Back in February of this year, it was possible to see construction progress in Arendelle. Thank you to @DLPReport and @hkdlfantasy for these photos of brand-new theming details, including Arendelle’s crest, the town’s clock tower, and even parts of the coaster track for Wandering Oaken’s Sliding Sleighs.

🔧 “Frozen Land” construction is progressing at Hong Kong Disneyland with the recent arrival of theming details (like the Clock Tower, Arendelle crest and town facades) and the coaster track for “Wandering Oaken’s Sliding Sleighs”!
Reporting and photos via @hkdlfantasy. pic.twitter.com/5T8uGmLXZs

Progress indeed! Just yesterday, Guests could see parts of the new coaster’s rockwork steel frame being installed at Hong Kong Disneyland. We’ve been told that the new coaster will be reminiscent of the Seven Dwarfs Mine Train in Fantasyland at Magic Kingdom at Disney World.

In addition to being built at Hong Kong Disneyland, Arendelle: The World of Frozen is also under development at this time at Tokyo DisneySea and Walt Disney Studios Park at Disneyland Paris.

And while Arendelle is taking shape at all three Disney parks, only Hong Kong Disneyland will have Oaken’s new coaster. 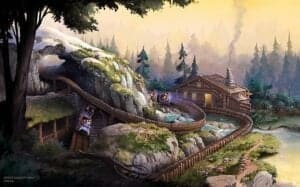 “Guests will venture across the bridge to explore the neighboring forest. They will enjoy an exciting family thrill ride that traverses the natural landscape, built by Oaken for this special occasion. Whatever discoveries and experiences Guests enjoy, they will find that Arendelle offers countless opportunities for surprise and delight during this kingdom-wide celebration.”

After seeing the progress being made at Arendelle and on Oaken’s Wandering Sliding Sleighs, we’re thinking a trip to Hong Kong Disneyland needs to be moved up a few spots on our bucket lists. What about you?