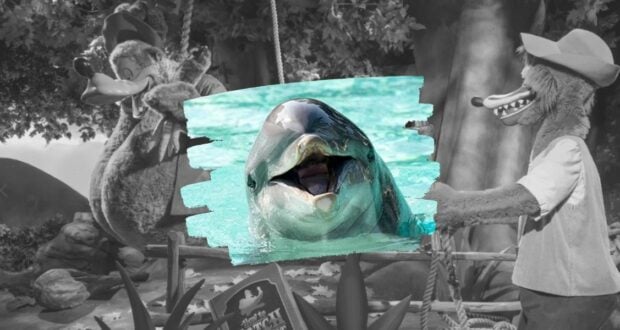 Despite petitions and pleas, the Disney fandom is trying to get used to the fact that Walt Disney World Resort’s Magic Kingdom Park has officially changed forever. To make a farewell extra difficult, SeaWorld hit its theme park competitor with a little gut punch.

Splash Mountain’s last day of operation on Sunday, January 22, 2023, in Magic Kingdom’s Fronteirland drew in massive crowds, as Disney fans were eager to enjoy the Song of the South (1946) attraction one last time. Disney closed the attraction and is making quick work to remove all signs of Br’er Rabbitt, Br’er Fox, and Br’er Bear and their “Laughing Place.”

Walt Disney Imagineering is already hard at work preparing to bring The Princess and the Frog (2009) to life with Princess Tiana, Prince Naveen, Louis, and other film characters to the new attraction, “Tiana’s Bayou Adventure.“

While Universal Orlando Resort is known for its snarky tweets on social media against its Central Florida theme park competitor, Walt Disney World, it looks like this time, SeaWorld is throwing shade Disney’s way!

As Disney fans woke to the now-closed Splash Mountain on Monday, January 23, 2023, SeaWorld decided to share a special tweet to social media, noting, “Splashing by to wish you a happy Monday!”

The “Splashing by” tweet includes an image of SeaWorld Orlando’s popular water ride attraction, Journey to Atlantis. The attraction is known for its flume and roller coaster hybrid experience as Guests discover the mythical paradise of the sunken city, along with its darker side. Much like Splash Mountain, SeaWorld’s Journey to Atlantis features a drop that causes Guests to get soaked.

And SeaWorld wasn’t alone! While Universal Orlando’s official Twitter account hasn’t thrown any shade Disney’s way (yet), report @InsideUniversal took to social media to share a picture of Universal’s Dudley Do-Right’s Ripsaw Falls with the message, “My, oh my, what a wonderful day!”

RELATED: Tragedy Strikes as Universal Studios Performer Appears to Drown, is Rushed to the Hospital

The “My, oh my, what a wonderful day” plays off of Splash Mountain’s now-extinct song, “Zip-A-Dee-Doo-Dah.“

Dudley Do-Right’s Ripsaw Falls is located in Universal Islands of Adventure Park and is a very similar log flume experience, including a large drop, that Guests experienced on Splash Mountain.

We see you theme park competitors! While a hilarious jab here and there in a tweet is to be expected when the competition is hot, we hope Disney Imagineers wow both SeaWorld and Universal fans as it prepares to welcome Tiana’s Bayou Adventure in late 2024.

2023-01-24
Jamie Sylvester
Previous: Bob Iger Proves Why He Deserves to be at the Top With Heartwarming Tweet
Next: Celebrate the Disney100 Anniversary From Home With 10 Disney Inspired Recipes From DOLE