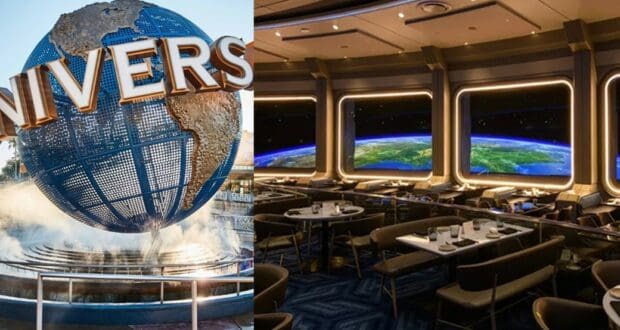 It has finally happened! Disney fans are rejoicing because, after the long wait, Walt Disney World Resort has launched the grand opening for the highly anticipated Space 220 Restaurant located within EPCOT. We were there for the grand opening on September 20, 2021, and enjoyed every moment of our dining experience right along with many other Disney Park Guests. From the elevator to space, to the impressive drinks, out-of-this-world food, and fantastic atmosphere… it’s really a Disney restaurant not to be missed! Check out our experience and photos here. Despite the Disney fan excitement, it seems like Disney’s neighboring competitor is possibly showing a little jealousy.

While lunch or dinner at Space 220 will make you feel like you leaving EPCOT and blasting off to space for a one-of-a-kind meal, it’s no secret that you actually keep your feet right on the ground, on Walt Disney World Resort property. The high-tech dining experience surrounds you with screens that truly make you feel like you are dining in outer space. You may spot an astronaut or space shuttle go by while you dine. Disney Imagineers did such an incredible design job that it’s easy to forget that what you are seeing are actual screens and not outer space through massive windows. As usual, with anything new and exciting at Walt Disney World, Universal Orlando Resort is right there ready to throw some shade on the Theme Park news.

On the day of the grand opening, Universal Orlando Resort took to social media to Tweet: “If you want to eat and look at giant screens, have we got a restaurant for you” and shared a photo of their NBA Sports Grill & Brew Restaurant located at CityWalk (with is basically Universal’s version of Disney Springs).

Ok, very funny, Universal. While yes, we’ve eaten at the NBA Sports Grill & Brew Restaurant at Universal’s Citywalk, we must say comparing the sports grill restaurant to Space 220 is hilariously far-fetched. Space 220 has already become THE place to dine at Walt Disney World Resort, and sorry Universal… there is nothing we’ve ever tried on your property that can match it. Nonetheless, we like a little tweet humor here and there, so thanks for trying!