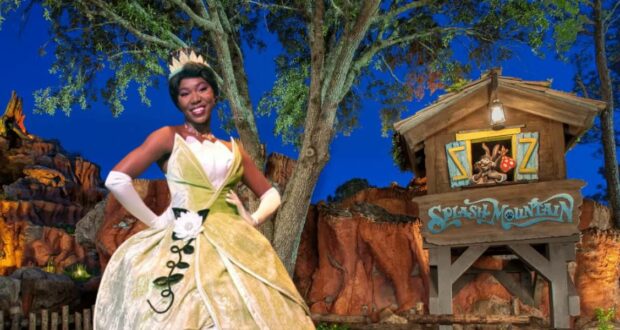 A visit to Walt Disney World Resort’s iconic Magic Kingdom Park will never be the same. While Disney fans attempt to move on from Splash Mountain’s permanent closure, Disney is wasting no time to bring Princess Tiana front and center.

January 22, 2023, will be a day long remembered for the Disney fandom. Thousands of Guests gathered in Magic Kingdom’s Frontierland for one last ride on the iconic log flume attraction, Splash Mountain. As fans said farewell to Br’er Rabbitt, Br’er Fox, Br’er Bear, and the memorable “Laughing Place,” there were incredibly long lines but also tears, smiles, and laughter.

As the sunset on January 22, Splash Mountain‘s barn doors closed forever. Now, as Disney Park Guests awake this morning to spend the day at Magic Kingdom, they were quick to notice Princess Tiana’s takeover of Splash Mountain.

Tiana’s Bayou Adventure will be arriving in “late 2024” with Princess Tiana, Prince Naveen, Louis the Alligator, and more characters from Disney’s animated film, The Princess and the Frog (2009), taking Guests on a tour of the bayou. While we’ll have to wait for the log flume attraction for another almost two years, Disney has already put up construction walls as of January 23, 2023.

@MickeyBlog_ took to social media to share a brief video of construction already unfolding at Splash Mountain, as shared in the tweet below:

Additionally, Disney has already changed its Park map. @WDWRLD took to social media on the morning of Monday, January 23, 2023, to share the following photo along with, “New Magic Kingdom park maps now have Tiana’s Bayou Adventure over Splash Mountain. #splashmountain.”

While we’ll miss the Splash Mountain ride, we are eager to see the new ride, Tiana’s Bayou Adventure, come to life with the help of Walt Disney Imagineering in the next several months. As always, we’ll be sure to keep Disney Dining readers updated as we watch Tiana’s takeover of the former Splash Mountain at the Magic Kingdom theme park.