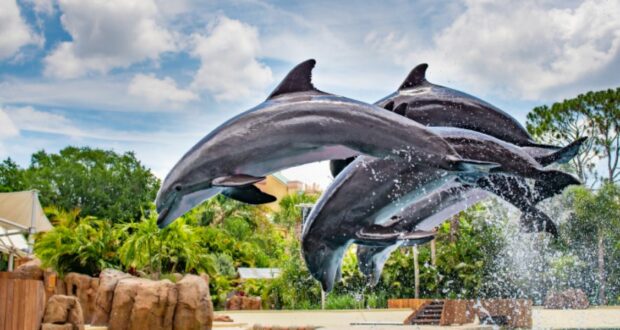 When visiting Orlando, tourists and locals to the area have a plethora of theme park destinations to enjoy. While we may spend most of our time exploring Walt Disney World Resort or Universal Orlando Studios, SeaWorld Orlando is a Park to remember.

With excellent reviews and discounted Park tickets, SeaWorld is a growing competitor of Disney for all the right reasons. But, a hard-to-watch video has surfaced of a SeaWorld dolphin attack that unfolded over the weekend.

RELATED: Guess Who Made the List of “Worst Value” in Florida Travel Destinations! (Hint: It’s Not Disney!)

@the.man.child took to social media over the weekend to share a video while visiting Orlando theme park, SeaWorld. He shares the video, along with the note, “A dolphin pod at SeaWorld Orlando today repeatedly attacked one of the dolphins in the pod, while the trainers were trying to do the show, causing the dolphin to start bleeding.”

As you’ll see in the video below, the pod of dolphins repeatedly attacked one dolphin at the SeaWorld Park, causing the lone bottlenose dolphin to bleed:

Hopefully, the dolphin is recovering from the incident. The comments to the video note, “This is why I REFUSE to go to Sea World;” “WHY DO PEOPLE EVEN GO HERE;” “This makes me so angry that poor thing has no escape;” and “It’s so sad they are all confined like this! @seaworldorlando this is not okay!”

RELATED: Underdog No More! In the Theme Park Wars Universal Has Come to Win

UPDATE: Not only has PETA released a statement, but SeaWorld Orlando has released the official statement about the incident below:

“This video shows common behavior among dolphins exhibited by both wild populations and those in human care as part of natural social interactions.  During this interaction, one dolphin sustained some minor abrasions.  The dolphin was examined by our veterinarian who determined the abrasions were superficial and did not require additional medical treatment.”

“The dolphin re-joined his pod without further incident and the group is behaving normally and eating well.  All of the dolphins in this video remain in good health. Numerous scientific studies have been published about this type of behaviour among dolphins demonstrating that it is normal and socially healthy.”

SeaWorld’s Dolphin Stadium holds a presentation called Dolphin Adventures that allows Guests to learn and see bottlenose dolphins interact and play. The show is described by SeaWorld with:

“Smart, playful, and found right off the coast of Florida, bottlenose dolphins are well-known ocean ambassadors here at SeaWorld. But there’s much more to their story, as you’ll discover in this fascinating new presentation at Dolphin Stadium.”

“Explore their natural behaviors and the traits they’ve evolved to help them survive and thrive. Hear what’s behind their playfulness and how it helps us make discoveries. Learn the role they play in our planet’s oceans, as well as the threats they face. Experience every thrilling moment and take away inspiring insights about caring for our natural world, only at Dolphin Adventures.”

Much like Walt Disney World’s Disney’s Animal Kingdom Park with the Kilimanjaro Safaris, a wild animal can be unpredictable even in the form of SeaWorld entertainment.

We will be sure to provide further updates as they are received.

2022-11-08
Jamie Sylvester
Previous: Orlando Airports Closing Ahead of Tropical Storm
Next: The Man Behind One of the Most Iconic Voices In ‘Harry Potter’ Films Has Died