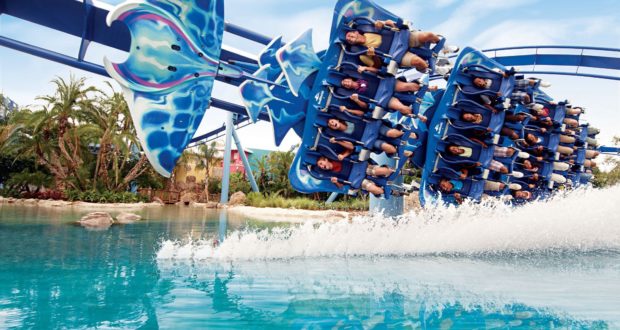 SeaWorld Orlando Is Open! Details & Photos from Our Visit

On Friday, June 5 Universal Orlando Resort reopened to the public. Less than a week later, on June 11, it was SeaWorld Orlando’s turn. This was also the reopening date for Busch Gardens Tampa, Aquatica Orlando, Discovery Cove, and Adventure Island Tampa Bay; all of which are owned by SeaWorld Parks & Entertainment. My family and I have had Platinum Passes to SeaWorld for years, and so we decided to check it out.

In order to visit any of the SeaWorld group of parks right now, you need a reservation. I made ours on June 8 when they became available, and I was able to easily reserve our spots. SeaWorld is operating at 30 percent capacity, but as far as I know they did not hit that today. The reservation system is simple, all you need it the barcode from your ticket. If you’re making reservations for a group you do not all need to be on the same account to end up on the same reservation.

SeaWorld opened at 10:00 this morning. We arrived a little bit after that. There was a line of cars to get into the parking area. This is not unusual. In order to get into the SeaWorld parking lot from either direction, you need to turn at a light. It can take a while at the beginning of the day, or if there is a popular act performing in concert.

Our pass includes Preferred Parking, but I honestly don’t see a need for it at SeaWorld. (Busch Gardens is a different story.) Here’s a tip if you’re headed to any of the SeaWorld group of parks. You can purchase parking ahead of time on the website or through the app. It’s slightly cheaper, and it allows for a hands-free transaction once you arrive. We followed the Crew Members’ instructions on where to park. People seemed happy to be back at work.

Part of the new normal for theme parks is temperature screenings. There was a line for this when we arrived, with markers six feet apart on the ground. The line moved quickly. The screening was held inside a tent, and then we moved to the next area.

Bag check at SeaWorld is still done by having someone look through your bag. There is a metal detector before, and then you’ll place the bag on the table. There was plenty of plexiglass separating the Crew Member from the guests. She had a large stick that she used to be able to see what was inside the bag, she didn’t really touch anything inside.

A few years ago SeaWorld changed from finger scanners to pictures when entering the park. This was a welcome change, I never liked touching those things. The Crew Member scanned the papers that I had printed with the reservations on them. He said that since they were linked to our passes he didn’t even need to see those.

Inside SeaWorld the park was relatively quiet. It was not crowded at all. I am not a fan of large coasters, and all of the other things that I usually ride were closed, so we decided to just concentrate on seeing the animals. We started by watching the first Orca Encounter show that has been held at the park in three months. Even though we were sitting in the middle of “a crowd”, we did not feel crowded. There were rows and even entire sections blocked off for social distancing. We didn’t get the normal ending for the show. Two of the whales were so happy to be performing again that they refused to go in the back. A trainer explained that when that happens, they will just let the whales do what they want. The whales happily swam around and started to splash the crowd again.

When the show was over, they instructed everyone to stay in their seats. Some Crew Members then came out with different colored flags. When they called your section, you were to stand row by row, and then follow the flag out of the theater. It was a simple way to make sure that people kept apart.

We also hit several of the animal encounters, both indoors and outdoors. There were places for people to stand and watch, but still be away from everyone else. There were a lot of young children there, and not all of them seemed to understand that they couldn’t just run up if someone else was already there. It wasn’t a problem, but it is something that parents should be aware of before heading to the park.

Face coverings are required. There were a lot of people trying to get around this rule by not wearing them properly. I saw several Crew Members nicely remind people that they need to wear them the right way. There are Face Covering Relaxation Zones, which are spots where people can remove the mask for a little while, as long as they maintain a distance of six feet from other parties. Masks were for sale, with a buy three, get one free deal.

There was plenty of hand sanitizer. There were large jugs near attractions, stores, restrooms, and plenty of other places. Most of the hand sanitizing stations had a pump, and the actual hand sanitizer was more watery than what I’m used to. We also saw one Purell dispenser with the foam-type product.

I am not a fan of the SeaWorld app. I tried to get wait times, but instead received a message about wait times being available only during normal park hours. I realize that someone just forgot to update something on the app, but it was still frustrating. What I really don’t like about the app, though, is the fact that there is so much upsell. You hit the spot for Show Schedule, and you’ll also immediately learn how to add Reserved Seating and Quick Queue to your cart. The top choice under Dining is the All-Day Dining Deal. I understand that they are a business, but it’s annoying how often they want me to add something else to my ticket.

Speaking of tickets, if you are thinking about heading to SeaWorld, you might want to buy your ticket online. That is where you will find the best deal. SeaWorld offers online specials quite often, and you will also not need to wait in line once you arrive. Then again, since reservations are now required, I don’t know if they are selling same day tickets at the park. If you are thinking about coming keep in mind that none of the SeaWorld Parks & Entertainment parks are open daily right now, and they plan to follow a reduced schedule for the rest of 2020.

When SeaWorld Orlando first started talking about reopening, a representative said that the park is made for social distancing. He was right. SeaWorld wasn’t crowded, and most everything that we did today was outdoors. We decided to leave when we saw that the rain was about to roll in. We had a great time, and it was nice to be back. I think that SeaWorld Orlando is doing all that they can to keep people safe. It is up to the guests to actually follow the rules.