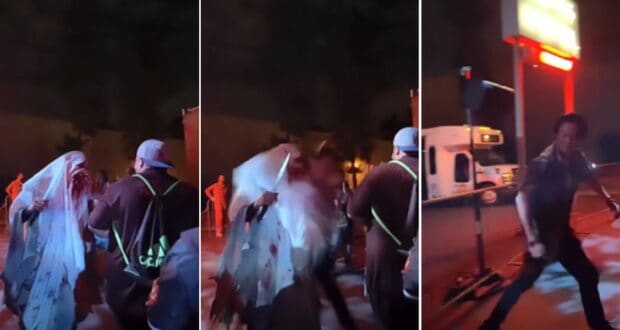 Sadly, this isn’t the first and likely won’t be the last of theme park Guests making poor decisions.

At Walt Disney World Resort and Disneyland Resort, incidents such as the massive Magic Kingdom Park brawl have occurred, as well as Cast Members being touched inappropriately.

While Universal Orlando Resort has seen its share of fights and incidents, this time, we’re headed over to Univeral Studios Hollywood in California, Disneyland Resort’s theme park competitor, where video captured a Universal Team Member being attacked by a Guest.

The video was first released by @retrorumpus via Instagram, with the note, “DON’T BE THIS PERSON! I didn’t see the before but it seems this scare actor accidentally touched his gf so he immediately went to violence instead of taking it up with a supervisor. This guy has major anger issues to do this. I heard he was arrested and banned but I’m not 100% sure.”

As you can see, the Team Member / Scare Actor was tackled by the Guest with great force, reportedly because the Team Member touched his girlfriend. Guests standing by captured the incident on video and were quick to ask the Team Member if help was needed.

Another share of the video hit Twitter via @ExpAttractions with the note, “This should NEVER happen at any haunt event, this guy should be banned from ever coming to the park again. It’s sad how we can’t enjoy stuff anymore without people like this ruining it or people who scare cause they love to do it get hurt and harassed, absolutely embarrassing.”

A clip of the video has also hit TikTok, with one Scare Actor sharing his thoughts on the situation, as shown in the video below:

Despite tempers at theme parks, an attack like this should never be used in an attempt to prove a point or resolve conflict. Several comments to the video hope the Universal Team Member attacked decides to press charges.

As always, we will keep Disney Dining readers updated as we learn more about this situation.