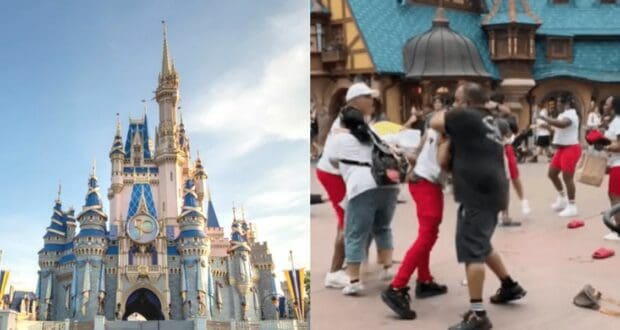 On the evening of Wednesday, July 20, 2022, breaking Walt Disney World news spread throughout Disney fandom, with Disney’s Fantasyland as the center of attention. A massive brawl involving multiple people broke out in the Disney Park, reportedly due to what one family felt was a line-skipping incident.

The Walt Disney World Resort fight broke out near the exit of Mickey’s PhilharMagic, near the popular Peter Pan’s Flight attraction. As you can see and hear in the video below, children were screaming and crying in the background, as the fight scene was absolute chaos:

New details emerged on July 21, 2022, which explained why the fight took place. Apparently, an adult-aged brother and sister were in line for Mickey’s PhilharMagic. The sister realized she had left her phone in her ECV and left the line to go retrieve it.

When she came back into the line to catch up with her brother, the family in white shirts did not want to let her through the line and even pushed her at one point. The sister did, however, make it back to her brother, and the two watched Mickey’s PhilharMagic show.

On July 22, 2022, the Orange County Sheriff’s Office arrested three people for misdemeanor battery, and lifetime bans from Disney theme parks were given to several involved in the fight.

Now, new reports are surfacing of the alleged involvement of a Disney star.

According to InsideTheMagic, “An incident report, body cam footage, and other Orange County Sheriff records suggest a young Disney star was involved in the fight. Three members of the New Jersey family considered the aggressors – Tauheesha Richardson, Antuan Richardson, and Fuquan Grant – were interviewed by police.”

“According to a tip received by Inside the Magic, Fuquan Grant is allegedly a false identity for Elijah Richardson, who recently starred in Marvel’s “The Falcon and the Winter Soldier” and “Hollywood Stargirl” (2022) on Disney+. In body cam footage, Fuquan Grant provided the same birthday as Elijah Richardson: September 24, 2002.”

“Additionally, Richardson is from New Jersey and publicly identified as Tauheesha and Antuan Richardson as his parents in a 2015 interview.”

As always, we will be sure to keep Disney Dining readers updated as we learn more about this incident.