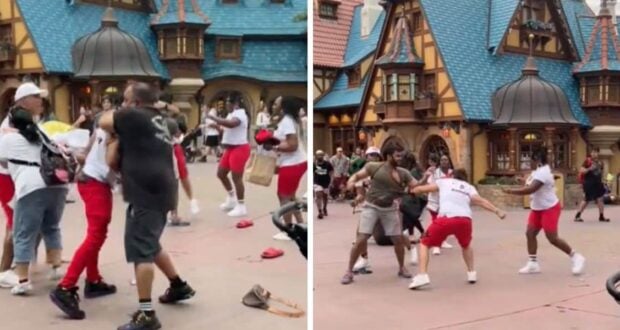 More details have emerged about the brawl at Magic Kingdom tonight. We spoke to a bystander about the incident who was able to give us an eyewitness account. The fight involved two separate families, names at this time are unknown so for now we will call them “Green Shirt” and “White Shirt Family”. The incident occurred due to a supposed line cutting incident at Mickey’s Philharmagic.

The sister of the man in the green shirt realized she left her phone in her ECV and left the line to go retrieve it. When she returned  White Shirt family did not want to let her back through at which point they pushed her.

The sister made her way back to her brother where they proceeded to watch the show without further incident.

Several bystanders and Cast Members attempted to break it up but the scene was so chaotic no one could get a handle on the situation.

Expletives were shouted and at one point White Shirt Family called Green Shirt and his sister “terrorists” according to the bystander.

The bystander estimated that it took approximately 6 minutes for Disney Security to arrive on scene. They were shortly followed by local Sheriffs and EMS. Green Shirt left with EMS and we are told he had a decent cut on his face.

It’s unknown if anyone involved was arrested, though we did check the arrest log for Orange County for Wednesday July 20 and didn’t find anyone matching the descriptions of either White Shirt Family or Green Shirt.

The bystander we spoke with said the whole situation was “traumatic” to witness and they wished Disney “had better security measures” because “you just never know these days”.

We will update you if any new information about this situation comes to light. Here is the video again for those who may have missed it: