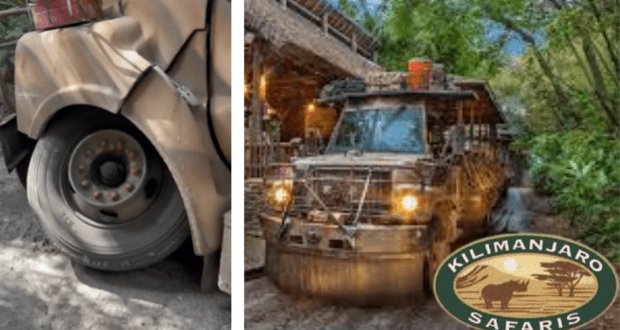 Hundreds of Guests are forced to use ladders, evacuate Kilimanjaro Safari trucks after an accident with the lead vehicle

Guests enjoying a popular attraction at Disney’s Animal Kingdom were met with an unexpected turn of events that led to them disembarking the ride vehicle and walking back to the loading zone.

RELATED: Disney has a plan for keeping wildlife warm at Animal Kingdom during the cooler seasons in Florida

Kilimanjaro Safaris is one of the most popular, family-friendly attractions at Disney’s Animal Kingdom. Disney must have known that the majority of Guests probably won’t have the opportunity to travel to the savannas of Africa and go on safari. So Disney brought the safari to them. 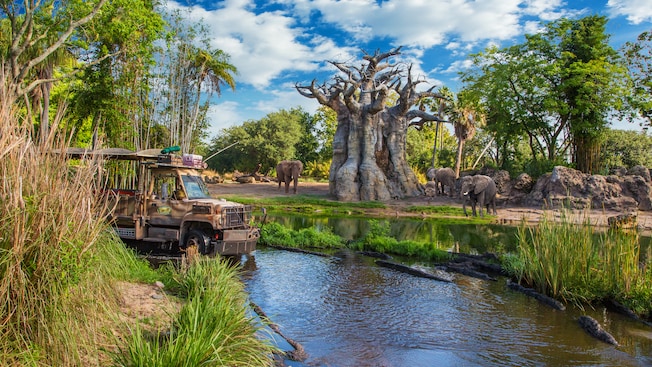 As part of the attraction, Guests board large trucks that have been outfitted to create a more rough-and-tumble ride experience as the trucks follow a pathway through different animal areas that are reminiscent of the different settings in Africa, such as the African savanna. Guests are treated to views of wildlife roaming freely, as more than 30 species of animals are featured on the safari experience, including the okapi, cheetah, hyena, lion, greater Kudu, the springbok, hippos, white rhinos, and more.

RELATED: Guests watch in horror as man leaps from truck at Kilimanjaro Safaris attraction just past a pack of wild rhinos

It’s a relaxing attraction for wildlife lovers of all ages that provides a much-needed break from the busy-ness of the parks and from the miles of walking Guests do in a day at Disney. That is, until something goes wrong.

Because the attraction is centered around wildlife, things don’t always go as planned. When sleepy giraffes decide to take their afternoon siestas by standing directly in the way of Disney’s safari trucks, there’s not much that can be done, except for the exercise of patience. If the animals stay on the pathway for a long time, animal keepers will often arrive to offer them a bite of their favorite snack, thus enticing them to move away from the pathway so trucks can continue chauffering Guests throughout the experience.

But occasionally, there are issues that don’t involve the wildlife, like this one.

A video posted by @purely_katelin shows the pathway lined with Disney safari trucks as far as can be seen. Guests from each truck are being evacuated from the vehicles and are asked to use a ladder to disembark from the trucks. (They sit up much higher off the ground than you might think!)

It’s a chaotic scene as Guests climb out of the trucks and gather around moving toward Cast Members who are working to give instructions throughout the evacuation, and it’s clear that neither the Guest with the camera or anyone near her really knows the cause for the evacuation. At one point in the video, @purely_katelin says that they were stuck in the lions’ area of the attraction for 40 minutes before the evacuation. 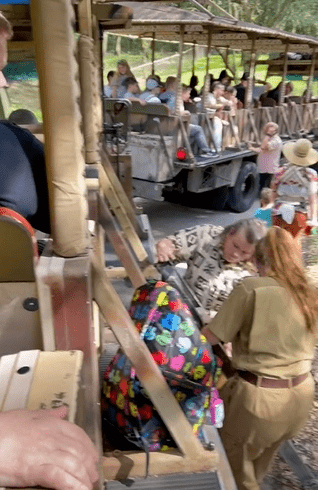 A Cast Member can also be heard saying, “put those cameras away for me please,” as she directs Guests as they leave the vehicles. Guests have to walk through the cattle guards that provide boundaries for the animals so they are contained in designated areas of the experience. Soon it becomes clear that Guests are going to have to “walk the rest of the way” through the safari. Still, no one knows why, until a little later . . .

This is the reason why we were stopped… #disneyworld #animalkingdom #nightmareonthesafari

As Guests file past the safari truck at the front of the line of vehicles, it becomes very apparent that a problem with the lead vehicle has caused the complete traffic jam in Africa that day. The lead truck was disabled, and vehicles behind it were unable to move forward because the pathway is only wide enough for one vehicle to pass at a time.

RELATED: Disney World has a new procedure for handling ride breakdowns, and Guests aren’t going to be happy

It’s difficult when something goes awry at the Parks, but Cast Members are usually very helpful in moving Guests to safety and ensuring that during a less-than-magical time, the magic is completely spoiled. Here’s hoping Katelin and all the Guests who evacuated went on to have a great day and a “wild” time at Animal Kingdom!

2022-02-17
+Becky Burkett
Previous: Disney has a new Metaverse Exec. His first task: Tell us what the heck the ‘metaverse’ is.
Next: Disney Houses We Wish We Could Live In!