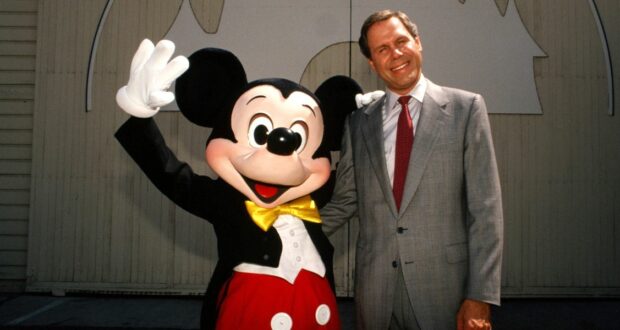 With Disney CEO Bob Iger back, there is a strong sense of optimism returning to Disney fans and Cast Members that had slowly been diminishing during Chapek’s time in office.

While Iger has already diagnosed Disney’s issue as the company was losing its “soul” under Chapek, now the well-liked former Disney CEO, Michael Eisner, is speaking up.

@Michael_Eisner took to social media to share, “The Walt Disney Company has suffered in recent years. This is a good time for us to remember the words of Walt Disney who said, “Everybody falls down. Getting back up is how you learn to walk.”

The tweet comes a few days after Eisner tweeted a welcomed return for Bob Iger. The first tweet caused a slew of Disney fans begging for Eisner to join Iger… to become the Walt and Roy Disney duo that the company so desperately needs right now.

Why is it important to listen to what Eisner has to say? Michael Eisner was with The Walt Disney Company as CEO from September 1984 to September 2005. The duration of Eisner’s career still upholds his strong reputation among Disney fans and stockholders.

RELATED: Iger for President? We Can Thank Iger’s Wife for His Return to Disney

Much of what Bob Chapek dissolved was actually what Michael Eisner fought to establish for the company, particularly in the Disney Guest experience platform.

Unlike Bob Chapek’s run as Disney CEO, both Michael Eisner and Bob Iger have continued to be well-liked and well-respected for their contributions to The Walt Disney Company.

With Eisner tweeting his support for the Disney company as it gets back on its feet, the tweet is once again sending Disney fans hoping and dreaming that Eisner will return to join the company.

While neither Bob Iger nor Michael Eisner have said anything further about the possible CEO duo working for the company jointly again, we understand why Disney fans think they would make a great team.

As always, we will be sure to keep Disney Dining readers updated as we learn more about Iger’s steps to help The Walt Disney Company bring back the magic.