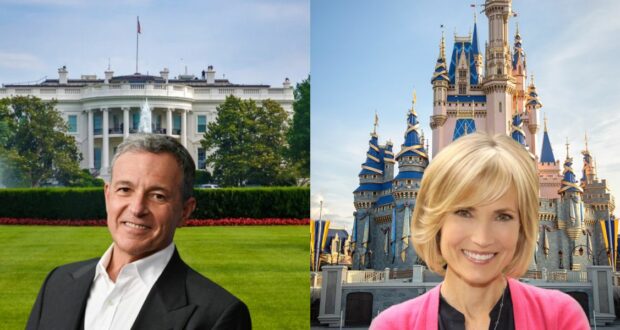 During a Town Hall meeting held with Bob Iger and Cast Members, Iger jokingly shared why he really returned to the Disney company… and it’s all thanks to his wife.

Iger is making big waves already as he hits the ground running to clean up the mess left behind by Chapek. With a new sense of optimism, Disney fans and Cast Members seem to genuinely be excited about what’s to come in the near future for Disney.

With Iger pressing on with the company shake-up and removal of Chapek’s Executives, he took a moment to gather Cast Members in-person and virtually for a Town Hall meeting on Monday, November 28, 2022.

@RobertIger took to social media before the meeting to share a photo of the company building with the note, “Filled with gratitude and excitement to be back @WaltDisneyCo!”

Willow Bay, the wife of Mr. Iger, is well known as a strong, talented leader herself. She is currently the Dean at USC Annenberg School for Communication and Journalism.

During the Town Meeting, Cast Members laughed along as Iger joked that the real reason he returned as Disney CEO is because his wife, Willow Bay, encouraged him to… because she didn’t want him running to be the next President.

Furthermore, Iger continued to speak of his wife’s support. In response to the question,”What was it like when you got that phone call?” in regards to returning as the CEO, Iger responded with:

“It was a surprise. I had some inkling that it would come that day. I talked with my wife. Her reaction was if you’re asked, you have to do it. Because you love the company and people so much. When the call came, I immediately said yes. I never fully detached, but I got emotionally distanced. I’ve never second-guessed since the call, though, including waking up at 4:30 am this morning.”

RELATED: Disney to Stay Out of Politics but Not Reversing Course on “Woke” Policies According to Iger

This isn’t the first time we’ve heard of Willow strongly supporting her husband. When Bob Iger recalled his hardest day as the Disney CEO, he shared Willow’s enduring support through the hardship as the two cried together.

We are thankful for Willow’s encouragement and support in Iger’s return to an obviously extremely difficult job. We can’t help but wonder, however, what it would have looked like if Mr. Robert Iger ran as the next President of the United States of America.