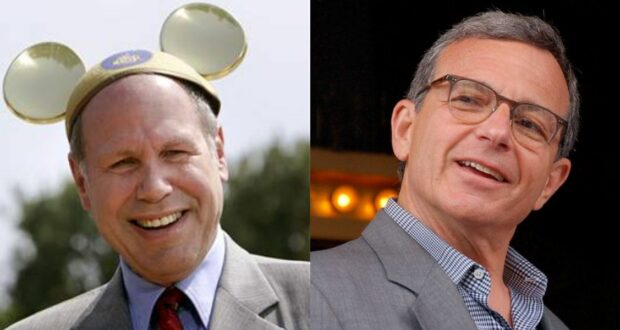 The news has erupted. Disney fans are still in shock as The Walt Disney Company has fired the Chief Executive Officer, Bob Chapek, and announced the return of former CEO Bob Iger. Now, with the news of Iger’s return, another former CEO, Michael Eisner, has taken to social media to comment.

On November 20, 2022, Disney announced Bob Chapek would be removed from his position effective immediately, with Bob Iger back in the CEO role. While the Disney fandom is still in shock and overjoyed with the news, Disney has been quick to attempt to erase all signs of Chapek from its platform.

With the return of the talented Bob Iger, Disney fans have a new sense of optimism as the holidays approach… and former CEO Michael Eisner is on the welcoming bandwagon for Iger.

RELATED: Disney Stocks Soar as Analyst Claims “The Magic Is Back”

Michael Eisner was The Walt Disney Company’s CEO from September 1984 to September 2005. His lengthy career with the company still holds a strong reputation among Disney fans and stockholders.

Eisner is credited with many experiences that Bob Chapek dissolved, such as the complimentary FastPass+ system (now Chapek’s charged Disney Genie+), Disney’s Magical Express complimentary airport transportation (now Guests find their own paid way), and beyond.

When Bob Iger left The Walt Disney Company, Eisner had the following to share:“Congratulations to @RobertIger for 15 amazing years as CEO of the @WaltDisneyCo! Fantastic job protecting the #Disney brand, expanding the breadth of the overall company, and orchestrating super growth. And he still has his hand on the creative rudder for almost two more years.”

So, what does this former Disney giant have to say now about Robert Iger’s return? He’s seemingly thrilled to see Iger back.

@Michael_Eisner took to social media to share, “Welcome back to Disney, @RobertIger!”

And Disney fans are LOVING it! Not only are they thrilled to hear Eisner’s support of Iger’s return, but they now want Eisner back to work hand in hand with Iger.

It would truly be the “dream team.” One fan even compares Eisner and Iger to the Walt and Roy Disney duo:

Could the now 80-year-old Michael Eisner come back to help Iger (the now 71-year-old) get The Walt Disney Company back on its feet again? Fans keep tweeting things such as “Come back to us Michael.”

Only time will tell if Eisner is even entertaining the thought of a return to The Walt Disney Company. It would be a fun duo, however, to have both Iger and Eisner back to creating and implementing decisions for Disney once again.

As always, we will be sure to keep Disney Dining readers updated as we learn more about the return of Bob Iger as Disney’s CEO.

2022-11-21
Jamie Sylvester
Previous: Bob Chapek Declines to Comment on Stunning Firing
Next: Chapek is Out and Disney Fans Have A LOT to Say About It