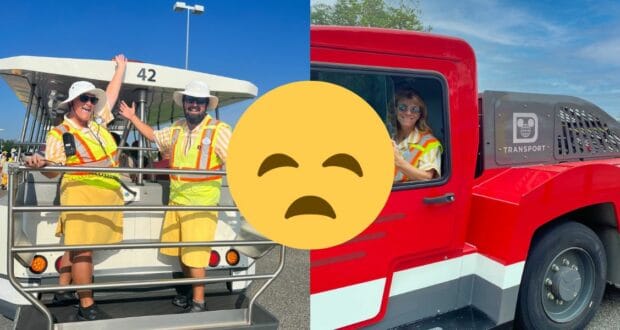 As The Walt Disney Company has worked to return experiences back to normal two years after the COVID-19 pandemic closures, it looks like the promise of the return of the parking trams to all Disney Parks has been retracted.

When driving to a Walt Disney World Resort Park, it’s no surprise that Guests will find a massive parking lot. Once parked, the walk to the main entrance of the theme park can be daunting… especially when you think of all of the walking you’re about to experience once in the Park.

Parking lot trams have always served as a great transportation option to park the car, wait for a tram, and take a ride to the entrance of the Park. It’s also wonderful to use a tram to get back to the car after a long day in the Park.

While Walt Disney World has returned parking lot trams for Magic Kingdom Park and Disney’s Animal Kingdom Park, it looks like Disney may be backing down on its promise to return trams in 2022 for EPCOT and Disney’s Hollywood Studios.

RELATED: Does the Chairman of the Disney Parks Get Off Easy Because of His LOOKS?

Disney website previously stated, “Courtesy trams have returned to Magic Kingdom Park and Disney’s Animal Kingdom theme park – and they’ll return to other Walt Disney World theme parks throughout 2022. Where available, this convenient mode of transportation will whisk Guests from the theme park’s parking lot to its Main Entrance and back.

This statement has now been removed from Disney’s website.

While Disney has pulled down the statement, the video tweet from a year ago is still up on @DisneyParks, stating, “Driver you are clear…to spread a little holiday cheer! Parking trams will be returning to Magic Kingdom Park later this month and other Walt Disney World theme parks throughout 2022!”

Almost exactly a year after this video was posted on December 2, 2021, we’re still awaiting the arrival of the trams at EPCOT and Disney’s Hollywood Studios. Disney has a month left to keep its promise on the return of the trams for 2022.

With Bob Iger having just returned as Disney CEO and the former CEO Bob Chapek gone… we’d hope Iger and Disney Parks President Josh D’Amaro would return what seems like a seemingly simple but fruitful piece for the Disney Guest experience.

We’ll be keeping our fingers crossed! In the meantime, be sure to take advantage of other Disney transportation options such as the Disney Monorail, Skyliner, buses, and boats.