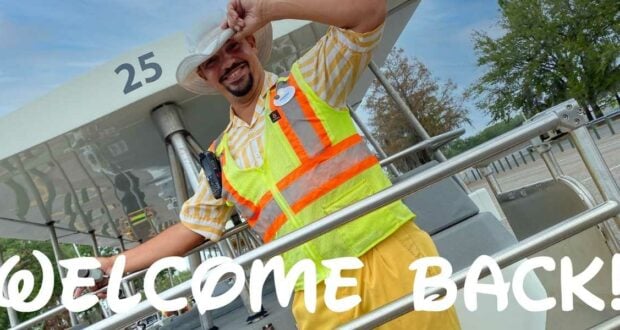 Cast Members Celebrate as Trams Return to One Park!

Exciting news for all the Disney fans out there! We previously announced that trams would finally be returning to Walt Disney World Resort. One Park’s trams are officially back in operation and Cast Members can’t help but celebrate.

It has been a LONG wait but we’re thrilled to announce that trams have returned to Magic Kingdom Park’s parking lot known as the Transportation and Ticket Center (TTC). Parking lot trams and Minnie Vans were put on hold when COVID-19 closures struck the Disney Parks. Minnie Vans have yet to return, but finally, well over a year later, the trams are revving up their engines!

Disney announced trams would once again be pulling Disney Park Guests to and from the massive parking lots to the Park entrances. Magic Kingdom Park was scheduled to open this month but Disney did not provide an official return date.

So, we were excited to see Walt Disney World Cast and Community announce on Facebook on December 19, 2021, “Driver, you are clear to the Transportation and Ticket Center!” Cast Members welcomed Guests back onto courtesy trams at the Magic Kingdom this morning.”

Yay! We’re thrilled to save our legs for Park walking instead of navigating the huge Transportation and Ticket Center.

Disney has also announced EPCOT, Disney’s Hollywood Studios, and Disney’s Animal Kingdom trams will return in 2022. Just like Magic Kingdom, however, Disney has not yet released an official return date for the trams. We will keep you posted as we are keeping our fingers crossed the remaining trams will be cruising along soon enough!

Did you miss the trams at Magic Kingdom Park? Let us know in the comments.

2021-12-20
Jamie Sylvester
Previous: Young Guest jumps out of Doom Buggy at one of Disney’s most iconic attraction
Next: Media Executive Predicts Bob Iger’s Return as CEO In 2022