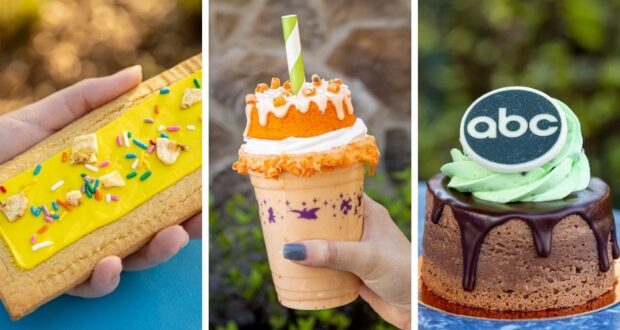 Hello SPRING! Walt Disney World Resort is rolling through March with excitement as the EPCOT International Flower & Garden Festival is underway, the grand opening of Star Wars: Galactic Starcruiser has launched, and the return of the Festival of Fantasy Parade is bringing back the magic at Magic Kingdom Park. Now, Disney’s Hollywood Studios is getting in on the action with NEW treats we simply can’t resist.

Time to grab your friends and family and head on over to Disney’s Hollywood Studios as Disney dishes out the latest news on drool-worthy treats available. Let’s dig in!

RELATED: Fantasmic Is Indeed COMING BACK to Disney’s Hollywood Studios!

First up, time to take a stroll down Sunset Boulevard where you’ll spot Hollywood Scoops located near the entrance of Rock ‘n’ Roller Coaster Starring Aerosmith. On top of its already delicious menu, Hollywood Scoops is now offering an Orange Blossom Shake. This treat is an orange and cream milkshake that is topped with whipped cream and an orange-scented donut! Milkshake AND a donut? Count us in.

Next, Beauty and the Beast is getting some recognition in the form of a sweet treat! Catalina Eddie’s (also on Sunset Boulevard), Guests will find the Beauty and the Beast Rose. The dessert has dark chocolate mousse with black currant and Morello cherry which sits atop a chocolate shortbread cookie, whipped cookies, and cream fluff, topped with gilded chocolate-covered cocoa nibs. WOW. Well done Disney, well done!

Spring really isn’t spring without a s’more! At Rosie’s All-American Café on Sunset Boulevard be sure to check out the new S’mores Cupcake! This fudge-filled chocolate cupcake is topped with graham cracker buttercream, toasted marshmallows, and a mini chocolate bar. This one might just be first on our list!

RELATED: Guests Will Say Goodbye to the Tower of Terror Attraction at Hollywood Studios This Year, at Least for a While

Who doesn’t love a good Mickey apple? Well, now The Trolley Car Café (AKA Starbucks) on Hollywood Boulevard is offering a Chocolate-covered Apple. This apple is covered with a dark chocolate and peanut butter crunch dipped Granny Smith apple with marshmallow ears. Plus, technically you’re eating fruit so we’re counting this one as “healthy” (wink, wink).

ABC Commissary is getting in on the Spring action with not one but TWO special treats this spring! Pictured above you’ll spot the yummy Mint Chocolate Chip Cheesecake. Those are some of our favorite dessert words! This treat is a chocolate cheesecake topped with dark chocolate ganache and whipped mint chocolate chip cream.

Calling all Cannoli fans! Head on over to the quick-service restaurant, PizzeRizzo for a delightful Strawberry Cheesecake Cannoli. The white chocolate and rainbow sprinkled dipped cannoli shell filled with whipped strawberry cheesecake is a heavenly spin on your average cannoli.

Time to head to Disney’s Hollywood Studios and treat yourself, Disney foodies!