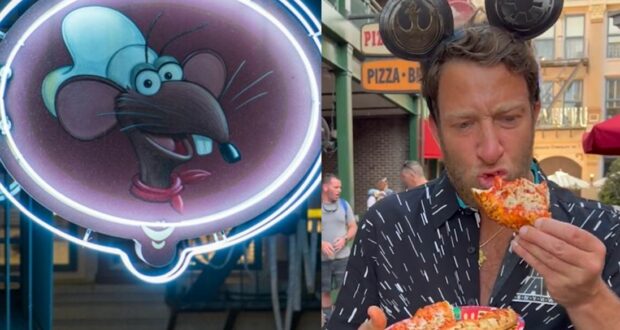 Barstool Sports recently reviewed a not-so-popular pizza option at Disney’s Hollywood Studios. Even though PizzeRizzo has never been a favorite dining option among Disney fans, check out the surprising review of PizzeRizzo pizza below!

It’s time to head to Walt Disney World Resort… and you’re craving pizza. As a Disney foodie, where do you go? Chances are you’re headed to EPCOT to devour some goodness from Via Napoli Ristorante e Pizzeria in EPCOT’s Italy Pavilion. But what about PizzeRizzo at Disney’s Hollywood Studios?

If you’re unfamiliar with Walt Disney World dining, keep in mind that PizzeRizzo doesn’t have the greatest of reputations among Disney fans. The quick-service restaurant located in the Grand Avenue portion of the Disney Park is known as a great place to find a seat with air-conditioning but the food is well, subpar.

Disney describes the quick service restaurant with, “Stop on by for pizza, a meatball sub, or antipasto salad at this friendly neighborhood joint run by Rizzo, the wise-cracking Muppet.”

Barstool Sports however did a surprising review of PizzeRizzo’s pizza that has Disney fans shocked with the results. Is the not-so-popular pizza actually better than our taste buds thought? Check out the review in the tweet below:

A 7.1! WOW… we’re shocked! That’s a pretty high score for a Disney menu item fans have been known to speak so negatively of. Also, yeah…. that’s not Remy. We do however like just how unbiased his review is! Fans comment with their disagreement…

RELATED: Where to Find the Best Pizza at Disneyland

One comment says, “Literally the worst pizza on Disney property. Lol” with another noting, “Dude the McDonald’s pizza is better than this garbage lmao”. The comments keep coming with, “How much did Disney pay for a favorable review? 3.7 at best” and “7.1?!?! Dave have you been drinking?”.

What do you think? Is PizzeRizzo’s pizza worthy of a 7.1 score? Let us know in the comments!

2021-12-30
Jamie Sylvester
Previous: Here’s how Disney’s ‘Encanto’ breaks every Disney mold in storytelling so far
Next: Hilarious Video of When a Disney Adult Gets Road Rage