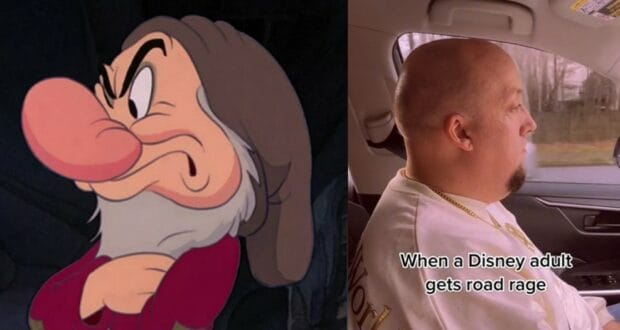 Hilarious Video of When a Disney Adult Gets Road Rage

Road rage… it happens! Depending on the person it can look very different. From the silent finger to the angry screams, it’s best to just turn up the music and keep the focus on the road. But what would a Disney adult look like during road rage? Well, this hilarious video sums it up perfectly!

RELATED: Video of Disney Cast Member’s Joke About Directions Is Too Cute

We’ve seen our share of funny Disney fan videos come through on social media. Remember when one fan created a Soarin’ video over Home Depot? Or how about the fantastic viral video of a baby not feeling the magic at Disney?

RELATED: This Disney Christmas Tree Is the Stuff of Nightmares

Now, think of those worst Disney experiences that you’ve either experienced or just know to avoid. Does anything come to mind? Well, for this TikToker he had a handful of Disney negatives to dish out if a Disney adult were to experience road rage.

@princecharlesing took to TikTok to share a fantastic video of what Disney adult road rage looks like. And he’s SO right on with everything he says! Check out the hilarious video below:

Oh my goodness, this is the best. From the balloon slipping out of the hand on Main Street, U.S.A., ride technical difficulties on Remy’s Ratatouille Adventure, and EPCOT Park Pass only to find they are sold out of alcohol… that’s true Disney hurt right there!

So, Disney fans, next time you feel that road rage coming on – leave the Grumpy response behind and simply think of your top Disney negatives to wish upon people instead of the alternative.

What would be one Disney negative you’d shout during a moment of road rage? Let us know in the comments!