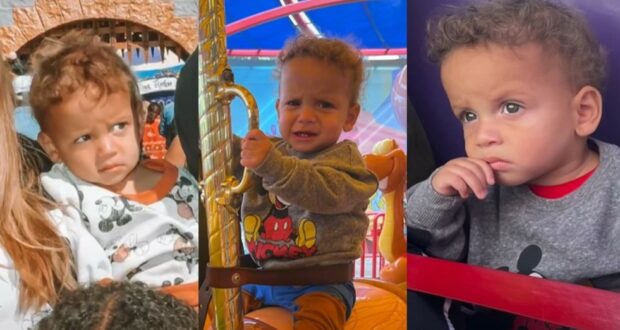 Hilarious Viral Video of Baby Not Feeling The Magic at Disney

Calling all Disney viral video fans! From a Disney Cast Member’s cute joke about directions to a mean warthog that makes Lion King’s Pumbaa trend – we never know what Disney video will go viral next. Social media has once again delivered and we are cracking up at this newest video. Disney is the “Most Magical Place on Earth”, right? So, what is there NOT to love? Well, this sweet little baby’s face says it all!

From what is all over social media, Disney fans have been feeling a little down recently as the Disney Parks have seen several changes in the past couple of years. With the removal of the complimentary FastPass system into the upcharge Disney Genie service, Disney dropping the complimentary Magical Express airport transportation for Resort Guests, and much more, Disney fans aren’t particularly feeling all that magical these days. Of course, Disney fans are pretty good at finding the magic in any situation… well, except for this little guy.

A Disney family recently visited Disneyland and took their little one on the magical adventure. @jfam.ily sarcastically posted to a viral TikTok video, “he really felt the Disney magic” with the video below. The video currently has 1.1 million viewers! Just watch as this baby’s face is anything but impressed with the Disney magic surrounding him.

The parents and siblings seem to be having a great time… but this sweet child’s face is just too funny. Have you ever felt how this little guy is feeling in the Disney Parks? We get it, little man! It’s hot, there are a lot of people, and for a baby especially they must be thinking what on earth are we doing? He may not remember this vacation, but hopefully, he will return with a smile on his face in the future!

Baby disney baby disneyland magic viral video 2021-10-20
Jamie Sylvester
Previous: Disney’s New PhotoPass Lenses Are Fun, But You Have To Buy Disney Genie+ To Use It
Next: Ole! Dining in Epcot’s Mexico Pavilion