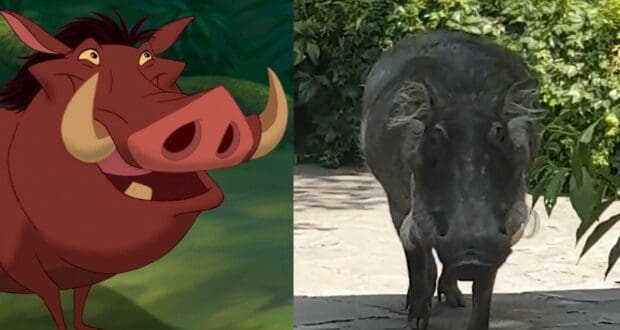 Pop some popcorn and get ready to read a few fantastic comments from fans of Disney’s The Lion King! Every Disney fan knows and loves the sweet and humourous Pumbaa as the beloved warthog in the classic Disney film. But, what would you do if you saw a warthog in person? Would you expect the friendly Pumbaa to come forward? Well, unfortunately for this person a video has gone viral showing the seemingly friendly warthog does not take after the beloved Disney character.

The video was first shared via Twitter by @sunshinechi1 and has gone viral rather quickly with currently over 3.3 million views! In the video, you’ll hear a person talking sweetly to the slow approaching warthog only to change his calm demeanor abruptly. Check out the video, and the fantastic tweets that just keep coming below!

Of course, Disney fans see a warthog and think of Lion King’s friendly and funny Pumbaa. Well, the word “Pumba” (misspelled as it should be “Pumbaa”) is now trending on Twitter because of the viral video and we’re just here for the comments.

@TFPDocBot tweets “People really forgot how Pumbaa (not Pumba) was clearing out the hyenas once they messed with his and Timon’s adopted son.” Another tweet from @advmadiagne says, “Mans watched the Lion King a couple times and thought Pumba was really friendly.” @aaliyahxo_99 tweets, “Another Disney star gone off the deep end. Hate that it had to be you pumba.” @8oycey says, “Man thought pumba had come along for a sing song. As soon as I saw the eyes appearing over the steps I’d have been gone mate! Hakuna Seeyalater”. Or how about the tweet from @TioSamSays, “People thinking Pumba is really going to come at you singing Hakuna Matata. Nah. Boars know where we get bacon.” And that’s just the beginning of the fantastic comments from the trending video!

The comments on social media are all too hilarious! I guess this viral video proves warthogs are not to be messed with. We feel for the person in the video and hope they have many more days filled with “Hakuna Matata” ahead.