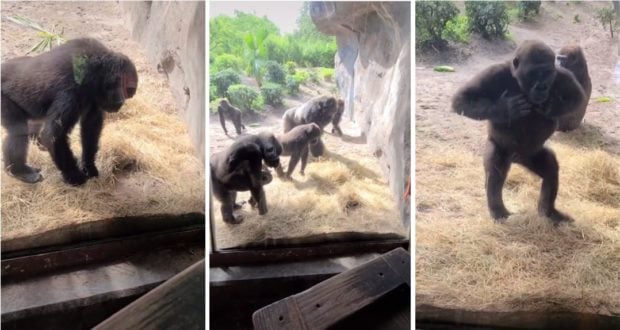 While many guests visiting Disney’s Animal Kingdom rush off to ride Avatar Flight of Passage or take on the Yeti with Expedition Everest, there is one especially favorite place of ours that is often overlooked. If you haven’t before, you’ll want to take time to check out Gorilla Falls Exploration Trail located in the Africa portion of Disney’s Animal Kingdom. Well, now the gorilla residents of Gorilla Falls Exploration Trail are going viral… as a snake entered their yard.

In the first video, TikTok user Bearded Kraken (@silkystrokesurvivor) captures “Gorilla vs. Snake”, as the snake is first discovered by the gorillas. The video has gone viral with 10.5 million views:

The gorillas aren’t exactly sure what to do! In the second video @silkystrokesurvivor captures “Gorilla VS Snake Part 2!” which now has almost 780,000 views:

While we aren’t exactly sure what ended up happening to the snake, it was interesting watching the whole gorilla troop curiously check out the snake. And if you want to see that chest beat one more time, @silkystrokesurvivor put out a third TikTok video, “Chest Beat Alert!” which has almost 600,000 views:

The troop of western lowland gorillas are some of our favorite to watch at Disney’s Animal Kingdom! They seem like gentle giants and watching them inspect something like a snake entering their enclosure is interesting to see. Who knew they would end up going viral?!

2021-06-28
Jamie Sylvester
Previous: Disney On Ice Returning to Orlando Soon!
Next: Review of Monsters at Work Is All Laughs and Fun