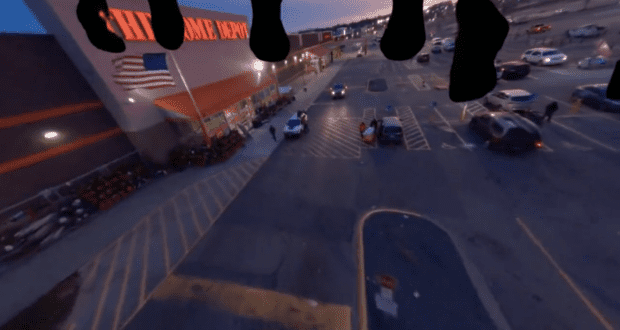 For over two decades at Disney California Adventure Park and over 15 years at EPCOT, Guests have been able to fly in a hang glide over beautiful sites like the Redwood forest and the Pacific Ocean. In 2001, Soarin’ Over California opened at Disney California Adventure Park and four years later, the same attraction opened in the Land Pavilion at EPCOT. Both rides became Soarin’ Around the World in 2016 and went from showing California landmarks to familiar locations from countries like France and Australia. 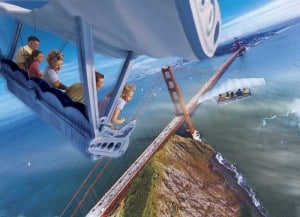 One fan loves Soarin’ so much that he could not help but be inspired when he saw a video shared by Home Depot on its official Twitter account. The home improvement store shared a promotional Christmas video of Santa’s view as he flies through the parking lot and through the store, finding exactly what he needs.

Twitter user @Belaskifilms took that footage and gave it a Soarin’ Over Home Depot makeover, complete with the ride music and dangling feet that are seen by those Guests who are not sitting in the front row.

I felt obligated to do it. pic.twitter.com/sSPv9qyAQ2

Social media users loved the cross-over, and some even took the opportunity to poke fun at Disney, claiming the footage Home Depot used was much better (and straighter) than the footage used in Soarin’ Around the World.

Fun fact: the tree at the end is actually straight.

Fun fact: the tree at the end is actually straight.

If you aren’t familiar with Soarin’ Around the World, here is more information on the attraction from the Walt Disney World website:

Feel the thrill as you’re raised high in the air and swept from one scenic locale to the next. See the world’s wonders—natural and manmade—like you never have before. No mountain is too high. No landscape is too far.

Your journey begins as the clouds part above the majestic Swiss Alps. Next, you’ll visit polar bears in icy Greenland, swoop past sailboats on Australia’s iconic Sydney Harbour and weave between elephants marching toward Mount Kilimanjaro.

Glide above marvels like the Great Wall of China, the Great Pyramids of Egypt and the Taj Mahal in India. Cruise over Monument Valley, Fiji’s Lau Island and thundering Iguazu Falls in South America. Look down on the Eiffel Tower as it sparkles like a jewel in the night, surrounded by the lights of Paris. 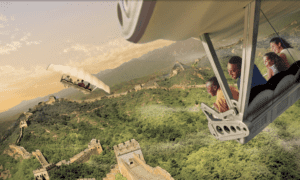 What do you think of Soarin’ Over Home Depot? Is it better than the original?

2021-12-08
Krysten Swensen
Previous: You don’t see this everyday: Disney official social media account comes out of hibernation to blast a Disney fan site!
Next: Disney Genie’s Disneyland Launch Was a Mess, So Disney Stopped It