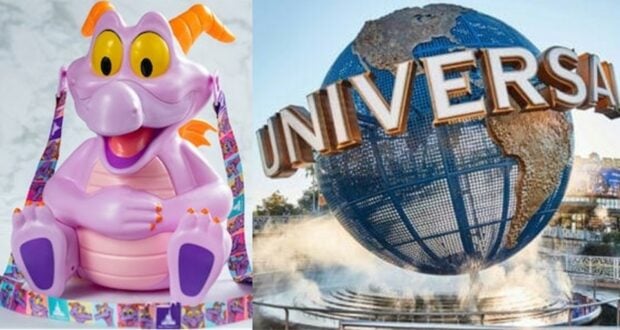 What’s one thing Disney fans seem to have in common? A love for popcorn buckets! We previously shared the news that a Figment popcorn bucket was arriving for the EPCOT International Festival of the Arts. As Disney Park Guests waited hours to snag a Figment bucket, Universal decided to take the opportunity to poke fun at Disney fans.

When the Figment popcorn bucket was released on the opening day of EPCOT’s Festival of the Arts, the lines for the Figment bucket reached over 5 hours! Figment fans were dedicated to waiting so they could have one of the popcorn buckets. While some resellers have already listed the buckets for high prices, other fans showed Disney magic by gifting the Figment bucket to those waiting in line.

Walt Disney World Resort’s Theme Park competitor down the road, Universal Orlando Resort, heard about the lengthy wait for the Figment popcorn bucket and decided to use the opportunity to poke fun. This isn’t Universal’s first time throwing shade Disney’s way as we’ve seen it as Universal recently suggested Disney won’t exist in the future, made fun of the Disney Genie launch, and even joked about EPCOT’s Space 220’s massive screens.

So of course, the comments are pure gold in response to Univeral’s tweet. Here’s one response with what looks like a screenshot of Disney’s Genie addition to the My Disney Experience App where someone made it look like one of the recommended activities is to “Wait in Line All Day for a Popcorn Bucket”:

Some people came to Disney’s defense with comments such as this one: “Get a fan base that will gladly wait seven hours for a popcorn bucket, then come back and throw shade all you want.”

Others had an idea for Universal to jump in on the action with, “Nows your chance @UniversalORL
release a jaws popcorn bucket with red colored popcorn.”

RELATED: Journey Into Imagination With Figment Star Eric Idle Jokes About Making His Own Popcorn Bucket

And of course, we can’t help but laugh along with “You win the internet today. Congratulations.”

This isn’t the first and likely won’t be the last we see Universal poke fun at Disney! What are your thoughts? Are Disney fans crazy for waiting HOURS to get a Figment popcorn bucket? Let us know in the comments.