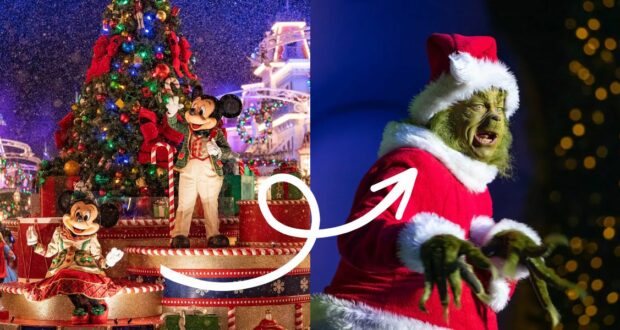 It’s beginning to look a lot like Christmas! We may have JUST turned the calendar into November, but the pumpkins are moving out with signs of the holidays already arriving for theme park giants.

At Walt Disney World Resort, Magic Kingdom Park was transformed overnight, with Disney Parks taking to social media to share a clip, noting, “It’s the holidays at Disney, let’s go! Okay, we gotta know are you team winter or fall on Nov. 1?”

Check out Disney’s clip below:

Walt Disney World boasts the return of Mickey’s Very Merry Christmas Party at Magic Kingdom this holiday season, as well as other fan favorites such as EPCOT’s Candlelight Processional and the EPCOT International Festival of the Holidays.

But Disney’s neighboring theme park giant, Univeral Orlando Resort, isn’t going into November quiet! They have released a teaser holiday video that features the removal of Halloween Horror Nights (HHN) and the welcome of Universal’s holiday mascot, Earl the Squirrel.

@UniversalORL took to social media to share, “Looks like it’s going to be an EARL-Y Holiday season. #UniversalHolidays.”

Universal Orlando Resort’s “The Awesomest Celebration of the Season” runs from November 12, 2022, through January 1, 2023, and is described with:

“Anyone can “Ho-ho-ho” and “Fa-la-la” for the holidays. But if you want to scream, laugh and shout your jingle bells off, you’ve got to awesome up your holiday at Universal Orlando Resort, where we do the holidays big time. It’s the biggest, loudest, awesomest holiday celebration of the season.”

RELATED: Is Your Family a Mix of DISNEY & HARRY POTTER Fans? You’ve GOT TO SEE This House!

Catch the larger-than-life balloons of Universal’s Holiday Parade featuring Macy’s, a nightly holiday parade, Diagon Alley decked out for the holidays during Christmas in The Wizarding World of Harry Potter, festive Hogwarts Castle decor and hot Butterbeer in Hogsmeade, music and fun of The Grinchmas Who-liday Spectacular starring the Grinch as Santa Claus, a holiday tribute store, and more.

It wasn’t too long ago that Universal Orlando challenged Disney World with the announcement that they will soon be targeting Guests seeking weeklong vacations, just like many Guests experience on a Disney vacation.

While Universal Orlando currently consists of two theme parks, including Universal Studios Florida and Islands of Adventure, it is preparing to open a MASSIVE Park called “Epic Universe” by the summer of 2025. This Park is larger than any Disney Park and will surely keep Central Florida tourists entertained.

Whether you’re spending the winter season visiting Walt Disney World or Universal Orlando (or BOTH theme park destinations), we hope you have a fantastic season with plenty of holiday cheer!

2022-11-01
Jamie Sylvester
Previous: Disney+ Subscribers Given Exclusive Shopping Experience
Next: ‘Nightmare Before Christmas’ Director Is a Little Tired of Tim Burton Getting All the Credit