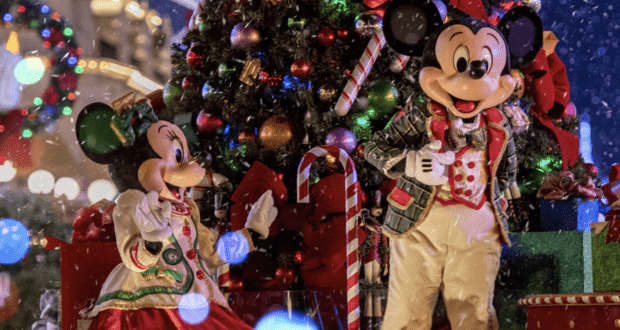 We may be in the middle of June, but today Disney is celebrating the HOLIDAYS! That’s right, stroll along with us as Disney delivers the news of what’s to come at Walt Disney World Resort for the 2022 holiday season.

Yes, you read that right! It looks like Disney is dropping last year’s Very Merriest After Hours and returning the beloved Christmas Party favorite. Disney has shared that Magic Kingdom Park will welcome the return of Mickey’s Very Merry Christmas Party! The special ticketed event will be held on 24 select nights, November 8 – December 22, 2022. This after-hours event will include:

Ready to snag your tickets? Tickets for Mickey’s Very Merry Christmas Party are limited and may be purchased online beginning July 7, 2022. Guests of select Walt Disney World Resort hotels can begin purchasing tickets as early as June 30, 2022. Ticket prices will range from $149 – $199 per person. Event dates are:

Disney has revealed, as a special yuletide surprise for Guests, each of the four Park icons including Cinderella Castle (Magic Kingdom), Spaceship Earth (EPCOT), Tower of Terror (Disney’s Hollywood Studios), and the Tree of Life (Disney’s Animal Kingdom) will celebrate the season with a rotation of unique heartwarming holiday-themed displays. Guests will continue to enough the 50th Anniversary Beacons of Magic as well.

Santa Claus is Coming to Town!

“Catch him cruising down Hollywood Boulevard in his candy-apple red convertible at Disney’s Hollywood Studios during the Santa Claus Merry Motorcade and voyaging across the Discovery River as part of a festive flotilla at Disney’s Animal Kingdom Theme Park. Santa Claus will continue to spread the joyous spirit of the season during visits to Magic Kingdom Park and Disney Springs, where guests may have individual time to take photos and share their Christmas wishes. Finally, at EPCOT, Santa Claus will join storytellers from around the world as a part of the EPCOT International Festival of the Holidays presented by AdventHealth beginning November 25.”

More holiday news reveals the return of favorites such as EPCOT’s Candlelight Processional and Disney’s Animal Kingdom’s Merry Menagerie. PLUS – EPCOT’s newest attraction, Guardians of the Galaxy: Cosmic Rewind will be getting a mash-up of seasonal jams! Check out Disney’s list of exciting experiences below:

What are the holidays without an enticing festive treat or two? Get those appetites ready because there will be no shortage of yummy bites this season:

Walt Disney World is promising plenty of twinkling trees and glittering ornaments throughout its Parks and Resorts, as the theme park always shines brighter during the holidays. Love the Disney Springs Christmas Tree Stroll? Great, because it’s making a return! Elaborately themed Christmas trees inspired by beloved characters will be at Disney Springs, plus Christmas trees will wow Guests at resorts across Walt Disney World. And yes, even the special gingerbread creations displays are returning in select locations.

While Disney has not revealed a sneak peek look into what’s to come for holiday merchandise just yet, they have announced there will be plenty of enticing merchandise lines debuting later this year.

We’ll be sure to keep you updated as we learn more about this breaking news!