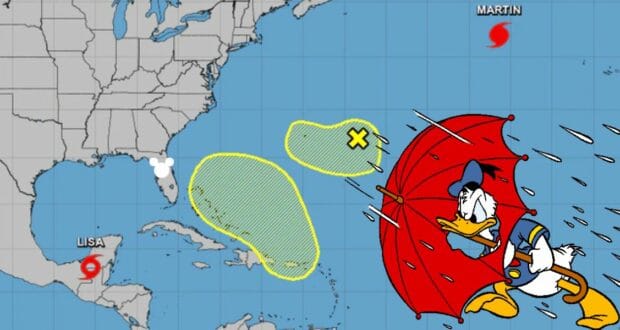 As the 2022 Atlantic hurricane season is coming to a close, with its seasons beginning on June 1 and ending on November 30, that doesn’t mean it’s time to let our guard down. Instead, the National Hurricane Center is closely watching a system that may threaten Florida.

Walt Disney World Resort in Central Florida is preparing for its grand holiday season. The massive Christmas tree has gone up at Magic Kingdom Park, and there is plenty of excitement as Disney prepares for events such as Mickey’s Very Merry Christmas Party, the EPCOT International Festival of the Holidays, and the beloved Candlelight Processional.

But, as Disney fans flock to the Parks to experience this joyous time of year, they will want to keep a close eye on the weather.

Florida is still working to overcome the damages surmounted by Hurricane Ian’s destructive path at the end of September 2022. Not only did the hurricane cause the Disney Parks to close, but neighboring theme park giant, Universal Orlando Resort, saw structural damage.

As Florida gets back on its feet, the National Hurricane Center is watching a storm tracking toward the Sunshine State.

According to Orlando Sentinel, “The National Hurricane Center continues to send advisories on what is now Tropical Storm Lisa moving over the Yucatan peninsula and Hurricane Martin in the far north Atlantic, but also two more systems with potential to become the seasons next tropical depression or storm. One has the potential to threaten Florida.”

It looks like a large low-pressure system is expected to develop this weekend (November 4-6, 2022) in the Caribbean Sea. By next week, it is expected to take a path over the Bahamas and head to the coast of Florida.

Currently, the National Hurricane Center gives the storm a 30% chance of developing with the note, “The system is expected to initially be very broad and disorganized, but environmental conditions could support gradual subtropical or tropical development beginning early next week while it moves generally northward or northwestward.”

Storms are nothing new to Disney! Remember the recent Disney Park funnel cloud that looked like a tornado at EPCOT? Check out the video below:

If headed to Walt Disney World in the near future, it looks like a clear weekend ahead. Beginning Tuesday, November 8, however, rain moves in with scattered thunderstorms expected through Friday, November 11.

As always, we will be sure to provide updates as we learn more about the storm with Florida in its path. Stay safe, Disney fans, and check out the National Weather Service for the latest developments.

2022-11-03
Jamie Sylvester
Previous: Could ‘Bear in the Big Blue House’ Replace Country Bear Jamboree?
Next: Where You Can Get Sugar Plum Shakes and Christmas Tree Cakes at Disney World This Holiday Season!