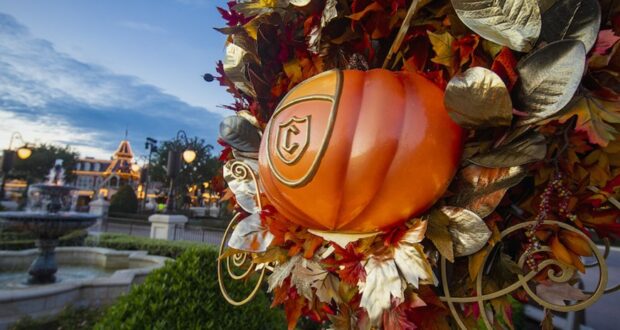 Fall has officially arrived! Walt Disney World has been celebrating all things Fall since mid-August when their Halloween decorations filled Magic Kingdon Park in anticipation of the new Disney After Hours Boo Bash. While we can’t get enough of the beloved Mickey Pumpkin wreaths that adorn Main Street, U.S.A., Disney is throwing a new fall decoration into the mix… inspired by Cinderella’s pumpkin carriage… and we’re loving it!

RELATED: Ready to Create Your Own Mickey Pumpkin Wreath? Here’s How!

This fall at Walt Disney World will be like no other! While yes, the addition of these Cinderella carriage pumpkin wreaths that adorn Magic Kingdom lampposts are fantastic, that’s just the beginning of what we are seeing as Disney prepares to launch their 50th Anniversary Celebration beginning October 1, 2021. The Cinderella Castle has been adorned with stunning 50th Anniversary decor. Magic Kingdom is getting an all-new nighttime spectacular called “Disney Enchantment“. Disney Fab 50 characters sculpture collection has started to pop up throughout each Disney Park. The Monorail has a new 50 Anniversary wrap around it. And even the Electrical Water Pageant just outside of Magic Kingdom Park is getting in on the 50th Anniversary celebration. It’s going to be an incredible Fall to be at Disney!

Can’t make it to the Disney Parks this fall? No worries! While you may miss your chance to see the Cinderella carriage pumpkin wreaths in person, you’ll still be able to enjoy Walt Disney World 50th Anniversary celebrations as they last a full 18-months which means Disney will be celebrating all the way through March 2023! Happy planning, your magical getaway, Disney fans!