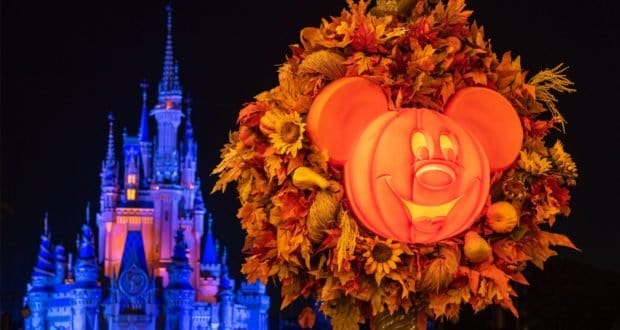 Halloween Has Arrived at the Magic Kingdom!

While most places are talking about last minute back to school shopping, at the Magic Kingdom it is all about Halloween right now. The park is ready for the holiday, even if it is still 91 degrees out. Disney Boo Bash After Hours runs on select nights between August 10 and October 31. I can’t make it to opening night (I have tickets for August 31), but I still wanted to stop by the Magic Kingdom to check out the decorations.

Like last year, the decorations at the Magic Kingdom are scaled back. There are no scarecrows when you first enter the park. There is a display of two giant pumpkin statues, and while I was there a PhotoPass Photographer was on hand to snap a photo. There wasn’t much of a line to get the picture, but I think it will probably get longer once guests start arriving for Boo Bash.

That doesn’t mean there aren’t any decorations. There are plenty of Mickey Pumpkins on the light poles. I was there during the day so I didn’t see them lit up. There are also decorations on the buildings all up and down Main Street, U.S.A., plus a few extra pumpkins and jack-o-lanterns. The Character Cavalcades that I saw while I was there were the regular cavalcades, not the Halloween ones from last year. Those should be running at Disney Boo Bash After Hours.

What there is plenty of is Halloween merchandise! Fans of Mickey Ear headbands will be thrilled, because there are several different designs to choose from. There are also plenty of T-shirt designs. You’ll find items based on Haunted Mansion, “Hocus Pocus”, “The Nightmare Before Christmas” and much more. There were signs in several spots that stated, “Limit two (2) per item, per guest”. There has been a problem lately with people buying up all the specialty merchandise and then reselling it for a huge profit, so Disney is doing something about it.

It may not feel like Halloween when you step out the door right now, but it does when you step through the gates of the Magic Kingdom. There are even seasonal treats for sale in several restaurants! Things still aren’t quite back to “normal”, but seeing the Mickey Pumpkins and the other decorations reminded me that we have come a long way. Last year I almost cried when I first saw the Halloween decorations because I was so happy that they were back. This year, they just make me smile.